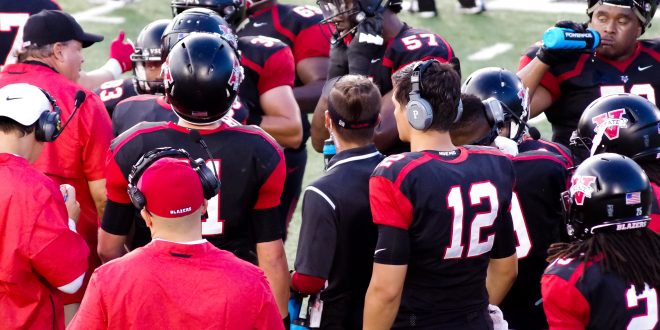 The Blazers will host Delta State this Saturday at 7 p.m in hopes of getting their sixth straight win.

The VSU Blazers football team has gotten off to a hot start this season, posting an undefeated 5-0 record, cleaning their way through the month of September. The Blazers rank number five in total offense in NCAA Division II. They look poised and are on a revenge tour after going 5-4 a season ago. These are my five takeaways from the Blazers’ season so far.

During the Blazers’ 2017 campaign Head Coach Kerwin Bell toggled between quarterbacks Rogan Wells and Adam Robles. This was seen as the Blazers having Wells or Robles to be the placeholder at quarterback until Roland Rivers returned from injury in 2018. With Roland Rivers transferring to Slippery Rock University, this ignited a quarterback battle during the 2018 training camp.

With Rogan Wells prevailing in the quarterback battle it looks like he is a blessing in disguise for the Blazers. Originally seen as a backup, Wells is showing that he could be a championship quarterback. Through the first half of the regular season, Wells has thrown for 1,231 yards and 19 touchdowns with three picks. Wells has arrived as the answer to the Blazer’s prayers for a reliable quarterback.

Running Back by Committee

Coach Bell has generated a two-headed monster with running backs Jamar Thompkins and Seth McGill. Throughout the five game winning streak the combo has amassed 853 yards and seven touchdowns. The “Thunder and Lightning” tandem broke out against Shorter for 213 yards and three touchdowns. Behind their stingy offensive line, Thompkins and McGill have created as dependable a rushing attack since the Blazers had Cedric O’Neal in the backfield during the 2015 season.

VSU’s defense has had a stronghold on opposing offenses this season. Led by freshman linebacker Jameon Gaskin, the anchor of the Blazers’ defense with team-high 32 tackles, VSU has allowed an average of 17 points per game from their opponents. Defensive back Ravarius Rivers has been leading the secondary with 29 tackles and an interception. Rivers has proven to be the security blanket for the Blazers as he will not allow receivers beat him deep. Defense wins championships. This defense will be pivotal, especially when it comes down to playing teams like Gulf South Conference rival University of West Georgia in the season finale.

In the Shorter game what really kept the Blazers from making a run in the first half was the dropped passes. Rogan Wells kept the ball on a string on most throws but many of them resulted in drops. This caused Rogan to go 5 for 20 in the first half, finishing 12 for 30. Receivers have to make sure they secure the passes because these same passes could turn into tipped interceptions once they face an equally matched opponent.

The Blazers future is bright. Coach Bell has done a great job recruiting talent. There are many young studs on this team. They Blazers offense is set for the next three to four years.

They have the freshman quarterback, Ivory Durham, out of Raines High School. This kid is electric when he touches the ball. Durham has thrown and rushed for two touchdowns each time he’s been substituted in for Wells near the end of games.

Next we have the receiving threats of sophomores Kenny Benjamin and Brian Saunds. The two have proven that it’s not the size of the dog in the fight but the fight in the dog, as they both stand below 6 feet tall. Benjamin and Saunds are the two leaders in receptions and receiving touchdowns for the Blazers. These two will create problems for opposing defenses as they will struggle to decide which receiver they would need to focus on throughout the game.

We already touched on Jamar Thompkins. The Redshirt Freshman is the GSC rushing leader, as he has rumbled for 545 yards. He will be a reliable source as the first head of the Blazers’ rushing game.

Seth McGill, the Week 4 GSC Freshman of the Week had his breakout game against Shorter. McGill thrashed the Hawks for 98 rushing yards and two touchdowns on ten carries. He has turned heads of other teams, playing alongside Jamar Thompkins, and now they are tasked with preparing for both backs.

The defense will be in good hands in the near future. They have two young linebackers in Jameon Gaskin and Craig Watts.

Gaskin tied his season high in tackles in the Shorter game with nine. Gaskin, who didn’t get much playing time in the first game of the season against Albany State, has emerged as the young general for the Blazers. Jameon Gaskin has set the standard for the defense and is ranked ninth in tackles in the GSC.

Along with Gaskin, his fellow linebacker Craig Watts has pumped new life into the defense. Watts is third on the team in tackles, bringing down ball carriers twenty times.

The defense has needed skillful youth after struggling to make stops after losing Kenny Moore and Malik Slater in back-to-back years. Head Coach Kerwin Bell has brewed up a mean and solid defense that has not allowed teams to put major points on the board.

The Blazers will host the Delta State Statesmen at Bazemore-Hyder Stadium on October 6. The game will kick off at 1 p.m.