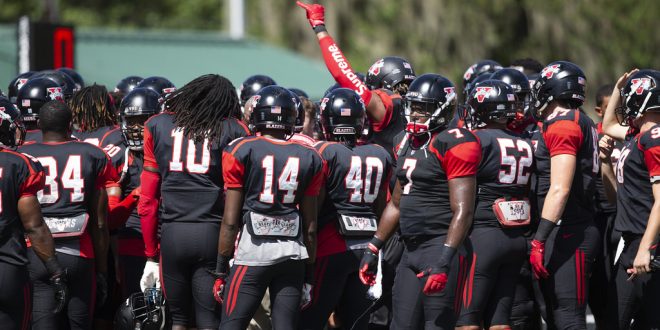 Now, nearly two years later, he may have a team fitting of that description.

This Saturday the Blazers have a date with the West Georgia Wolves to determine who will be the Gulf South Conference Champion.

Ahead of the matchup, the Blazers had to travel to Pensacola for a contest against the Division II national champion runner ups from a year ago, West Florida.

The Argos entered this season ranked as the No. 2 program in the nation, and while they haven’t maintained that ranking this season, they proved to be a worthy opponent that needed the Blazers full attention.

The Blazers were leading 17-14 in the third quarter and the Black Swarm got a stop forcing UWF to punt. Brian Saunds tried fielding the punt but muffed it, and UWF took over the ball at the VSU 4-yardline.

Blue Wahoo stadium became unhinged as the Argos scored and took a 21-17 lead over the Blazers. In that moment, the Blazers had their entire football lives hanging in the balance.

An entire season of work could have gone down the drain if they allowed that moment to become too big for them.

On the next drive, VSU went to its tempo offense that has been successful all season and soon found themselves back in the driver seat at 24-21. The Blazers weren’t out of the fire yet, and on their next offensive possession, they turned the ball over once again.

The Black Swarm stood as tall as it has all season in the midst of the offensive struggles. First, Craig Watts grabbed an interception and returned it to the Argos 13-yardline. VSU got a field goal out of that possession.

On the next UWF drive, Nick Belz overthrew his receiver and found Raymond Palmer instead. Palmer then did what he does best when he gets the ball in his hands, he made a play. He returned the interception 33-yards for a VSU touchdown to give them a two score lead in the fourth quarter.

VSU would find the endzone two more times for good measure and to maintain their statistics as the highest scoring offense in the nation.

Special Teams didn’t do much to help the Blazers throughout the game and while the final score didn’t reflect it, neither did the Blazers offense. The high energy, high paced, bullet train was stalled for possessions at a time.

And yet here they are: Undefeated.

The win on the road for VSU displayed a poise that they haven’t possessed in recent memory. The confidence that this Blazers team has in themselves and each other is beyond its years.

This team can achieve higher than a GSC championship. VSU should be looking around the region and sizing up the competition because they can easily come out of the Super Region Two as the best team.

The Blazers have the top offense in the nation and a defense that has proven that they can make big plays when they’re needed. As a team, that’s a deadly combination when put together.

VSU scored 31-unanswered points after falling behind 21-17 in Pensacola. In a playoff environment, the Blazers responded as a championship team would.

This weekend, the Blazers will have the opportunity to live up to the championship part of Bell’s phrase, but the task that comes beyond this weekend, in the post-season, is what I’ll be watching for.

It’s been five weeks of classes for students at VSU during the coronavirus pandemic. To ...