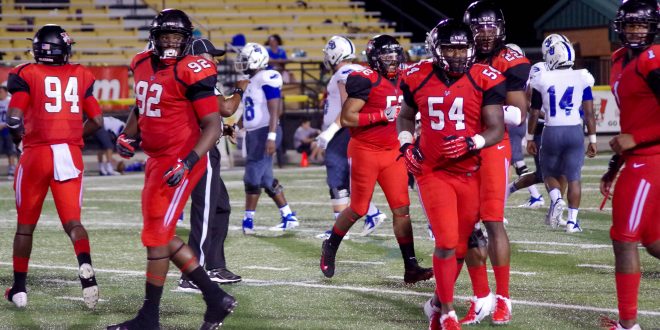 The Blazers will look to improve their record to 10-0 this Saturday Nov. 10, as West Georgia will travel to Bazemore-Hyder Stadium for the Peach Basket Bowl.

With people just now hopping on the Blazer bandwagon, it’s clear that fans are finally catching on to how good this Valdosta State football team is.

Well what if I told you that this is more than just a good team?

That this good team is the root of a blossoming dynasty?

I’m not sure how many people can wrap their head around that idea, just like how many doubted the idea of this team running the table and finishing 10-0.

Well, now they’re just one game away from 10-0 and have been proving the doubters wrong. But no matter if that game ends in a win, loss or draw, this program will be relevant for years to come.

Head Coach Kerwin Bell is in his third season here at VSU and he’s brought in talent that has been producing since they touched the field.

These players are shaking up the nation and look like they will continue to do so in the years to come.

“The most important deal is right now,” Bell said. “But sometimes you get to thinking about it, we got these guys for two or three more years. This is going to be a growing experience, this is probably going to be their first huge, big, championship game…They’re just going to get better and better as they go through these experiences.”

VSU is the best scoring offense in the nation and is powered by a group of freshmen and sophomores.

At quarterback is sophomore Rogan Wells. Wells is the ATM machine and general for this unit and brings an interesting dynamic with his passing and running ability. Wells has played 18 games in his Blazer career and has scored 55 total touchdowns. That’s money.

The backfield features the duo of redshirt freshman Jamar Thompkins and true freshman Seth McGill. Both backs have great vision, speed, agility, hands; they have the whole package.

Saunds is a touchdown magnet, he led the team in touchdown receptions last year and is doing the same now with 9 touchdowns. Gallimore is an explosive threat, leading the team with 583 yards on an average of 26.5 yards per catch.

Benjamin is the spark plug, his shiftiness makes him almost impossible to tackle one on one, allowing him to break off huge gains.

Defensively, some key players are in their final year at VSU: Guito Ervilus, Raymond Palmer, Iseoluwapo Jegede and David Brown, just to name a few.

But the young bucks under defensive coordinator Danny Verpaele have been balling, and will no doubt be an exciting group to watch in the future, especially the linebackers.

Linebacker Craig Watts is a versatile sophomore that is great in coverage and is second on the team for total tackles with 54. Following Watts is freshman Jameon Gaskin, he’s third with 52 tackles and runs on a sideline to sideline motor.

Incoom is a natural pass rusher and leads the team in quarterback hits. As he has plenty of time to polish up on his technique, Incoom is sure to become a force of his own.

These aren’t the only studs that teams need to look out for: there’s a plethora of them and even more that’ll come through recruitment.

But this young core of VSU have years ahead of them to progress into a winning machine and revive the championship tradition of Valdosta State football.

So, this leads up to my point.

We’re not just watching a team have a great year that no one foresaw, we’re witnessing the VSU football program rapidly transform into a dynasty before our eyes. The Bell era is taking off and it’ll be exciting to see what they’ll accomplish.

It’s been five weeks of classes for students at VSU during the coronavirus pandemic. To ...