Home / Sports / ‘We can score in bunches’: VSU playing beyond the arc 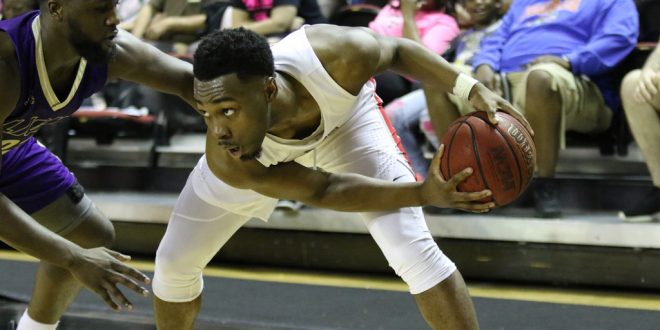 Blazer basketball has shot 63 three-pointers in the first five games of this season.

‘We can score in bunches’: VSU playing beyond the arc

Winston Morgan speeds down the floor awaiting the outlet pass from Goree Venable in the third quarter. There’s only one defender trailing him to the empty lane for a layup, yet Morgan had other plans.

With no hesitation, Morgan dribbles once and steps into a dagger three-point basket. He wipes the sweat from his face and celebrates with one of his signature gestures.

Beau Justice and Clay Guilozet immediately glance away, following the basket, adding a small shrug of the shoulders. Mike Helfer smiles from ear to ear at the play, yet the fans are the only noise in The Complex.

These series of events display how lethal the Blazers are as a basketball team. They have seemingly mastered the art of excitement by way of the three point line.

Even when they miss the long-range attempts, the VSU faithful is in uproar as if it was a make.

“We just try to have fun out here and give the crowd a show,” Morgan said. “We really feel like the Golden State [Warriors] of the GSC, so we just try to prove that.”

Through the first give games of the season, the Blazers are No. 1 their conference in three point shooting percentage with a 44 percent clip. As their wins pile up, their means of taking risks have become a lot higher.

On Monday. Nov 19, the Blazers defeated Brewton-Parker 129-81. In the matchup, Morgan and company put on a barrage from beyond the arc, draining a season-high 19 three-pointers.

It’s only going to get scarier for their scheduled opponents, as the Blazers have trended upward.

The Blazers will begin Gulf South Conference play on Thursday Nov 29, as they will host (4-2) Union to complete VSU’s five game home stand.

The Bulldogs will have a hefty test scoring above their average, as only Albany State has eclipsed the 90 point mark with 92 points on Nov 15.

The game is slated to begin at 8 p.m ET following the women’s game at 6 p.m versus Union.