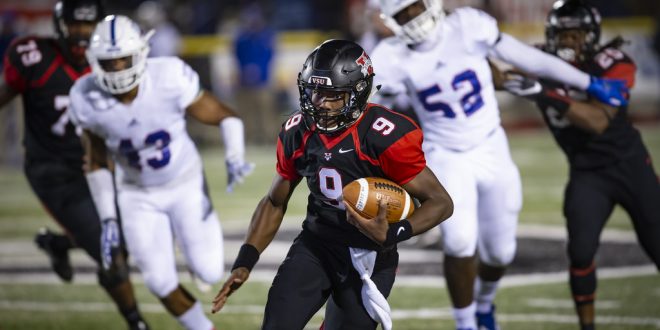 With a win over Notre Dame of Ohio this weekend, VSU will advance to the national championship game.

This Saturday marks the NCAA Semifinal matchup between Valdosta State and Notre Dame of Ohio.

The Blazers are favored to beat the Falcons and move on to the Championship game in Texas.

However, the Falcons will come into Valdosta with hopes of upsetting the best team in the nation or putting up a fight at least.

The Blazers put on a dominant showing in the both of playoff games they’ve won, scoring at least 60 in each of them. They’ve combined for 127 points while just allowing 37 against them.

“There’s always room to improve, we still haven’t played our best football,” said Head Coach Kerwin Bell. “I thought we played a very consistent and efficient game last week, but we can get better.”

VSU dominated Lenoir-Rhyne 61-21 in the NCAA Quarterfinal and held the lead with a vice grip all game long.

The Falcons are two games into the post season as well, but barley emerged victorious in both of those games.

They’re first challenge was Hillsdale College and won the game late in the fourth quarter 19-14. In the following round they faced Slippery Rock and former VSU quarterback, Roland Rivers.

Notre Dame had troubles again, and the game relied on Rivers to lead Slippery Rock to victory on the final drive. Slippery Rock failed to convert on a 4th and four at Notre Dame’s 31-yardline with just seconds left, and the Falcons slipped by 21-17.

Looking at their outcomes, Notre Dame has dropped a total of 40 points throughout their two postseason matchups.

VSU can score 40 points in one half.

Then when comparing the two, the Falcons don’t do anything significantly better than the Blazers, and that shouldn’t be a surprise.

What’s impressive about Notre Dame is their ability to disrupt offenses with a lot of sacks and takeaways. They’ve collected 47 sacks, 14 interceptions, forced 20 fumbles, and recovered 19 of them.

There’s no doubt this team is good, but could they possibly be better than the best?

Those stats are notable, but they haven’t played against a line like the Blazers. Jeremy King, the best offensive linemen in the nation, anchors the Pancake Platoon and is accompanied by two First Team All-Region members in LaVonne Gauthney and Adonis Sealey. The Platoon has just allowed 15 sacks on the year through 12 games.

That decorated line protects Harlon Hill Award finalist and quarterback, Rogan Wells. His combination of decision making and athleticism is what makes him so dangerous. He can make the right read to one of his playmakers or do it himself by scurrying down field for a big gain. Wells has 656 yards on the ground and 11 rushing touchdowns to compliment his 2,592 passing yards and 32 touchdown throws.

On offense, the Falcons have a beast at running back in Jaleel McLaughlin. He’s the nation leader in rushing with 2,382 yards and did it on 6.5 yards per carry with 18 touchdowns. The freshman averages 172 yards on the ground per game and is undoubtedly the player to watch out for.

“They have a really good offensive line, a really good running back, a really good team, that’s why they’re obviously undefeated,” said VSU defensive coordinator, Danny Verpaele. “We always want to be aggressive, we want to attack, that’s kind of our philosophy… our guys have embraced it, we’ve got a lot of good football players, and a lot guys make plays.”

This won’t be the first time the Blazers have faced a good running team. West Georgia’s tailback, Devontae Johnson, finished No.11 in the nation for rushing yards this year with 1,320 yards. Leading up to the UWG and VSU game, Jackson was on fire coming off four straight 100+ yard rushing games.

But then he met the Black Swarm. Jackson was neutralized to just 39 yards on the ground with his longest run going for 21 yards, he was essentially a nonfactor and the Blazers went on to win the game 47-31. So, the test of a strong running game is nothing new for VSU.

Along with a scary run defense, the Black Swarm also likes to play the game of takeaway and be disruptive in the backfield. VSU’s defense has collected 44 sacks, 16 interceptions, and forced seven fumbles this year. They even rank No.15 in the nation for total team tackles for a loss.

Basically everything Notre Dame has to offer, the Blazers have already seen and conquered.

This game should be another notch under the Blazer’s belt and the stamp on their ticket to McKinney, Texas, where the National Championship will be played.

The Semifinal matchup will be hosted at Bazemore-Hyder stadium Dec. 8 at noon.