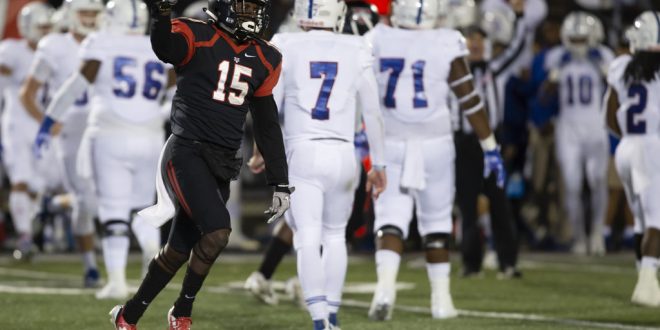 With a trip to Texas on the line the Black Swarm is more important than ever for the Blazers.

Let’s take a walk through history.

A team goes undefeated in the most vaunted football conference in the nation. Breaks the single season scoring record in that conference and is the nation’s top scoring offense.

In post season action they outscore opponents by a margin of 127-37 and the team still hasn’t played their best football yet. At least not according to VSU head coach Kerwin Bell.

“We want to be a much better football team than we were last Saturday,” Bell said of the undefeated Blazers. “We still make mistakes. There’s always room to improve, we still haven’t played our best football. I think we played a very consistent and efficient game last week but we can get better.”

That’s after a 40-point victory over a 12-win football team that was as disciplined a team the Blazers will face all year.

The Blazers are 120 minutes away from potentially being national champions. They are one of two teams that are hosting a Division II national semifinal game this weekend. Quarterback Rogan Wells is a finalist for the Harlon Hill award, the nation’s top award for a DII football player.

Name a record and this team has broken it, name an adversity and this team has overcome it. The Blazers endured the best that the Gulf South Conference and Super Region Two had to offer. Now they’ll face their biggest test yet: Notre Dame (OH).

The Falcons enter the contest undefeated, as VSU, and the two teams have more similarities. Both teams blazed through their season and sit atop their respective conferences in total offense.

Both teams led their conferences in rushing yards and have freshmen running backs that took home conference honors. For the Blazers, Jamar Thompkins finished second in conference rushing yards and was selected as GSC Offensive Freshman of the Year in addition a to first team All-GSC selection.

The two teams even have similar time of possession with the Falcons edging the Blazers with an average of 30:26 minutes per game to VSU’s 28:35.

With the similarities that these two teams draw it’ll be hard to separate them once kickoff comes at noon on Saturday. So what does VSU need to make sure they advance? It’s the same component that has flown under the radar all season: The Black Swarm.

When conference awards were announced the Blazers offense was littered throughout the selections as expected. However, there was no first team selections for the VSU defense.

“We don’t care about the stats and accolades and all that stuff,” defensive coordinator Danny Verpaele said. “The only stat that matters is a win. We got a lot of good football players, we know that. We play by committee and that’s who we are.”

Playing by committee has given the Blazers a major push in their run this season. The Black Swarm has seven forced fumbles, 16 interceptions, 44 sacks and 100 tackles for a loss. Five of those interceptions were returned for touchdowns for VSU.

As the saying goes the best offense is a good defense and the Black Swarm has provided the Blazers with that offense this season.  Going into Saturday and the test that awaits they’ll need to be able to take the best punch that the Falcons can deliver.

Every moment that the Blazers offense isn’t on the field will be dangerous for the final result. Defensively if VSU can stay disciplined and stay away from penalties that extend the Falcons’ drives they’ll be fine. McLaughlin is a very talented player but the Black Swarm has an 11:1 advantage over him at all times.

VSU is four quarters of football from a trip to Texas. Whether they’ll get there or not is completely up to them. They’re facing another talented team that will test how good the Blazers really are. The stakes are high as they’ve ever been and only time will tell if this team will get the chance to etch their name in the championship final.