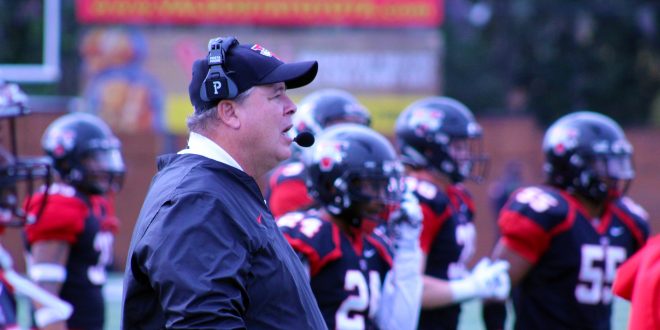 Blazer football is headed to the national championship after defeating the Notre Dame (OH) Falcons 30-24.

Book the tickets to Texas.

Valdosta State defeated Notre Dame of Ohio in the Division II playoffs semifinal 30-24 to advance to the national championship.

In the most grueling offensive game yet the Blazers found a way to rise once again.

The Falcons forced the Blazers to tally a season low 329-yards of total offense as the Blazers were disrupted more than they have been all season.

The Blazers sped down the field on their opening drive going 58-yards in 8 plays to take an early 7-0 lead. On the Falcons first drive the Black Swarm forced them to punt which was blocked by Walker Schwab and resulted in a safety for VSU.

Taking a 9-0 lead into the second quarter the Blazers would be held scoreless in the period and found themselves on the wrong side of a 10-9 game out of the half.

The Falcons received the ball first in the second half and marched down to the Blazer’s six-yardline.

David Brown jumped a passing lane and returned an interception 100-yards to give the Blazers the lead and momentum back. The Swarm forced the Falcons to punt on the ensuing drive.

A 32-yard return by Brian Saunds set up Rogan Wells to find Kenny Benjamin for another VSU touchdown.

“We’re only going to go as far as our defense carries us, head coach Kerwin Bell said after the game. “When you get this deep in the playoffs and you’re trying to win a championship you’ve got to have a championship defense.”

With a two score advantage in the third the Blazers would normally be in the clear but Notre Dame was not done fighting.

A stop on defense forced a VSU punt and the Falcons came up with a block of their own. They punched in a short touchdown to make it 23-17 with under two minutes remaining in the third quarter.

That’s when GSC Offensive Freshman of the Year Jamar Thompkins took matters into his own hands – breaking away for an 84-yard touchdown run to give the Blazers a 13-point advantage going into the fourth quarter.

“I think the way you win big games and championship games is to grab the momentum and hold on for as long as you can,” Bell said. “That was the one thing I was disappointed in. There was a lot of times where we’d have the momentum and do something not smart and let them get back the momentum. You can’t do that if you want to get to the championship but we overcame that.”

The Blazers would lull the fourth quarter and quell the Falcons’ last ditch efforts to comeback.

Harlon Hill candidate Rogan Wells was contained by Notre Dame’s rush throughout the game and only had 134 yards passing and 37 yards rushing on the day.

Despite the offensive struggles the rest of the team stood tall when it needed to most.

“It’s all about being able to tell a great story,” Bell said. “This run that they’re apart of … being a part of that game that’s a great story you can tell for the rest of your lives.”

With the win the Blazers will be headed to McKinney, Texas where they will compete for a national championship against Ferris State.