Home / Sports / Flying under the radar: Black Swarm has one more test 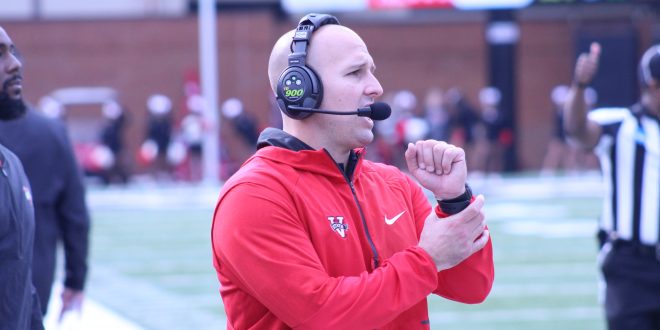 The Black Swarm has overachieved all expectations this season. Now they have one last test to decide if they will win a championship.

Flying under the radar: Black Swarm has one more test

There is an old adage that states “The best defense is a good offense” but in VSU’s case, they have both.

The Blazers offense has ascended to ranks that few teams ever achieve.

They average 52.2 points per game through 13 games which makes them the highest scoring offense in the nation. They broke the record for highest scoring team in the Gulf South Conference wide open and add to their record with every point scored.

Quarterback Rogan Wells was a Harlon Hill finalist for the top Division II player in the nation and has commanded the Blazers offense all season.

Wells is responsible for 44 of the VSU’s touchdowns (33 passing, 11 rushing) and has nearly 3,500 total yards on the season.

The Blazers offense is balanced in every aspect of the game. They have three all-conference linemen protecting the GSC Freshman of the Year Jamar Thompkins and his backfield mate Wells, the GSC Player of the Year.

There are seven Blazers that have rushed for a touchdown this year and 11 different receivers caught a touchdown pass.

The list of adjectives to describe this offense include words such as prolific, bountiful, emphatic and resounding but they also have the defense to match those same terms.

The Blazers defense suprisingly had no first-team selections when conference awards came out. The same defense that leads the GSC in sacks with 45 and interceptions with 17. The Blazers hold opponents to a conference best 20.7 points per game.

VSU leads the nation in defensive touchdowns with six interceptions and one fumble for a touchdown.

In the playoffs the Black Swarm has stepped up even more. During the three game span against Bowie State, Lenior-Rhyne and Notre Dame (OH) the Blazer defense has produced 203 tackles, seven sacks and five interceptions. The deficit from the three competitions combined was 157-61.

The games against Bowie State and Notre Dame (OH) featured two other Harlon Hill finalist in Amir Hall and Jaleel McLaughin. Those two were defeated and had their campaign ended by the Black Swarm.

With one more test standing in the Blazers way they’ll have to rise to the call once again.

Jayru Campbell won the Harlon Hill award by edging out Wells by 76 points for first place on Friday afternoon.

Even with the high usage of Campbell for the Bulldogs he only had five interceptions and three fumbles lost all season.

Campbell has performed as the top player in the nation all season and navigated the Bulldogs to a 15-0 record.

If the Black Swarm has proven anything this season it’s no moment is too big for them.

When it looked grim against West Florida they got two interceptions –one that was returned for a touchdown.

Against West Georgia they contained the leading rusher in the conference to only 39 yards on 13 rushes.

They shutout the leading passer in the nation in the second half of the second-round of the playoffs.

Heading into the finale the Swarm has one last mission and they’re going to have to do it against the top player in the nation. The question isn’t if they can do it but rather what they can do to disrupt Campbell.

Earlier this week head coach Kerwin Bell discussed making Campbell uncomfortable. If the Swarm can put pressure on him and force him to make poor decisions they’ll give the Blazers the chance to earn their fourth national championship.

It’ll all be settled on Dec. 15 in McKinney, Texas at 4 p.m. EST. The game can be broadcasted on ESPNU and streamed on the ESPN app.