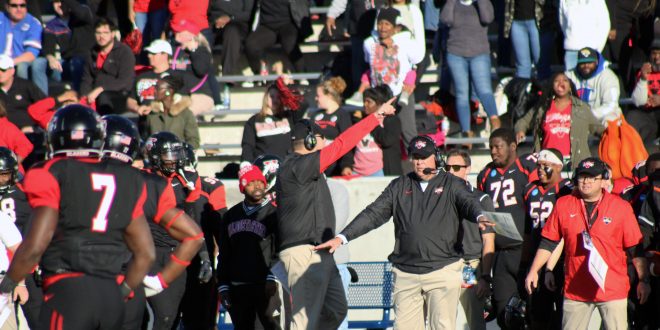 After going undefeated and winning the national championship against all odds here's five takeaways from a historic season.

The Blazers cemented their legacy as possibly the greatest VSU football team in school history after capturing the NCAA Division II National Championship Saturday. But their work isn’t over. This is chapter one of the new dynasty that has taken over Titletown.

We all remember when the Blazers weren’t included in the preseason AFCA Division II rankings and were picked to finish fifth in the Gulf South Conference preseason polls. The Blazers took that with a grain of salt and made every team they faced pay for it.

The odds were stacked against the Blazers when it came to the polls. Though the Blazers came off a 5-4 season, the voters failed to acknowledge the Blazers historic success and realize that the struggles would not last long.

After showing all season that they were the superior team to West Georgia, it took the Blazers to actually beat the Wolves to trounce them in the rankings. Voters hesitated all season to place the Blazers at number one, but the Blazers showed how much better they were than everyone else, completing blowout after blowout up until the last two rounds of the tournament.

Let’s rewind back to the Notre Dame game. When the fiery Blazers offense were neutralized, the defense stepped up to guarantee that the Notre Dame offense would not get their wheels rolling, either. Guys like Ravarius Rivers, Jameon Gaskin, David Brown, Iseoluwapo Jegede, and Stephen Denmark along with the rest of the cast made it possible for the Blazers to even make it to the Natty.

Though the Blazers will lose Jegede, Brown, and Denmark to graduation, I trust that Coach Bell will bring on more talent and fill those missing gaps for a stronger defense.

Rogan Wells torched Division II this year and it still wasn’t enough for him to win over the Harlon Hill Trophy, losing to Ferris State quarterback Jayru Campbell.

Wells erupted for 49 total touchdowns and four interceptions. Though Wells cared more about the national championship win, don’t think for once second that he won’t be in the running for the trophy again next season.

He already made his case that the voters got it wrong when he passed for 349 yards and five touchdowns along with a receiving touchdown on the grand stage.

Dynasty in the making

Coach Bell hit the nail on the head the recruiting he’s done over the last two seasons. After inheriting David Dean’s team, Bell put together a team that struggled in their first season.

Now, you see that they were just growing pains. The team got a year older, but still young and was able to put it all together to bring a championship. The train will keep rolling from here as much of the team will be going to their sophomore or junior years and will be a surprise if the Blazers didn’t see more championships.

The entire Division II should now be on notice. If they didn’t know that the Blazers were for real, now they know. The youngsters have now tasted the gold but they want more hardware to add to Titletown, USA. And I don’t see them giving up the trophy if they continue to bring the same game they had this season.

Previous Notebook: Blazers top performances of championship run
Next What’s Your Take: How VSU became the best in the nation

On Friday, March 6, the VSU President’s Office sent out an email addressing the coronavirus ...