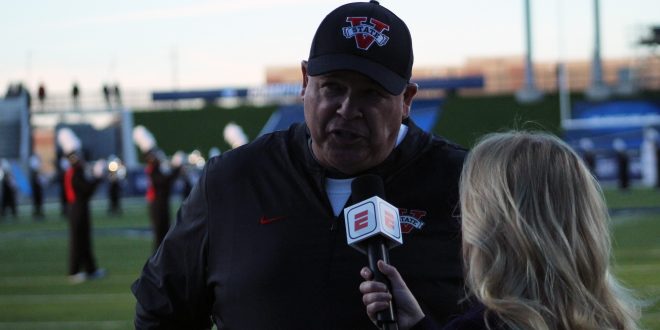 It's hard defining a single game that was crucial to the Blazers undefeated season and championship run so we gave you eight.

Kerwin Bell’s Blazers set fire to the football field this season. Going undefeated for the first time in program history –they torched teams on both sides of the ball during this national championship run. It’s hard to say that one performance holds more weight than another when a team goes undefeated but these were the games that made the Blazers season special.

This game is an automatic go for me. It’s the game that started it all for this team. I still recall talking to players prior to the ASU game a year ago when the confidence was through the roof. That game resulted in a 29-12 road loss that defined the Blazers season before it even started. This year the Blazers scorched the Rams in a 45-14 victory to get the ball rolling. After the game players talked about what they wanted to accomplish. They wanted to score 40 to 50 points a game and be the best offense in the nation. Spoiler alert: If you don’t know how the story ends you may want to stop reading now. They finished averaging 52 points per game with the top offense in the nation.

This is the game that woke the sleeping giant in my opinion. The Blazers went on the road and defeated the No. 8 team in the nation. West Alabama gave the Blazers a fight in the game but thanks to the two touchdown advantage Ravarius Rivers and Alex Brown provided from two interception returns the game was never close. I think this was the game that gave the Black Swarm the confidence that they needed. They knew they were good but they proved that they could score which proved to be a deadly component all season.

Ah, yes. The classic “trap game” and all of its troubles. Delta State entered into the game defeated at 0-5 while the Blazers entered the contest with a 5-0 record. It was so easy to look past the Statesmen. The Blazers struck in the first three minutes of the opening quarter. However, they found themselves knotted at 28 going into the half. That’s when the Blazers summoned all types of fury and outscored Delta 31-0 in the second half. Lio’undre Gallimore had a breakout game of sorts tallying 194 yards on five receptions. This game was wonky for lack of a better term. The game fell on fall break at VSU so the lowest crowd in the regular season was tallied. The Statesmen got off 86 plays to VSU’s 59 and had nearly 40 minutes in time of possession. Still in the end the Blazers got the win and set up a notice that they were legit.

The West Florida win was the game of the year to me. VSU had so much riding on that game in the grand scheme of the season. They entered into the contest at 8-0 with a matchup against undefeated West Ga. looming the following week. The Argos were the national champion runner ups from the prior season and has become a conference powerhouse in the three years of program existence. VSU overcame the adversity of losing their lead in the third quarter from a mishandled punt and shutout the Argos over the final 20 minutes of play. This was a win that showed the true team aspect of this year’s Blazers. On the road in a hostile environment and everyone bought into the mission. That was the mark of a champion.

The Wolves and Blazers have quite possibly the most storied history in the state of Georgia. The two teams met for the peach basket, Gulf South Conference title and bragging rights to cap off the 2018 regular season. West Georgia had been the “better team” all season in the eyes of voters. VSU didn’t need any bulletin board material but they’d been getting it every week that the national rankings came out. The Blazers opened the game with a flea-flicker that went 45-yards to set the tone for the rest of the game. Ivory Durham had a game for the ages as he scored a 53-yard touchdown as time expired in the first half to give the Blazers a 13-point advantage at the half. The freshman phenom also threw a 25-yard touchdown after coming in at receiver and receiving a handoff from Rogan Wells on a trick play. The Black Swarm stood tall once again holding the Wolves to only 10 second half points. This game gave the Blazers the first taste at the rewards they had worked so hard for. They were able to lift the coveted peach basket and GSC title in the same night.

The Blazers most impressive win came against nationally ranked Bowie State in the second round of the NCAA DII playoffs. Amir Hall was touted as the top quarterback in the nation by some, but the Black Swarm held his offense to 16 points. The Bulldogs were coming off a win against West Alabama where they scored 41 points. VSU put on an offensive clinic, passing for 261 yards and four touchdowns between Wells and Durham while eight Blazers combined to gain 344 yards on the ground with four touchdowns. Not to mention the defensive touchdown scored on an interception return by Stephen Denmark. The Blazers were just too much for the Bulldogs as they outscored them by 50 points in a 66-16 victory.

This was the most grueling game of the season and the Falcons might have been the biggest test for VSU. The offense was held to 20 points below their average scoring total and Rogan Wells has never been contained the way he was. Somehow, a blocked punt for a safety, 100-yard interception (longest in program history) and an 84-yard touchdown run gave the Blazers the edge they needed to dispatch the top rusher in the nation and the young Falcons. The game was ugly but it might’ve been the wakeup call that the high flying Blazers needed before the championship game. In boxing terms they got knocked to the canvas but they still won the decision. As for the Falcons, with a freshman running back and quarterback duo like McLaughlin and Brimm we’ll likely be seeing them again in the post season.

ENTER ROGAN HILL. One day after losing the Harlon Hill trophy for most outstanding player in Division II to Jayru Campbell (Ferris State) Rogan Wells has a breakout game. Wells finished with 349 passing yards, 39 rushing yards and 25 receiving yards on one of the most insane plays Kade Bell has ever drawn up. Wells had five touchdowns through the air in the first three quarters to tie the record for most passing touchdowns in a title game. His sixth touchdown was a receiving touchdown from Ivory Durham that gave him the record for player responsible for the most touchdowns in a championship game. Not only did Wells have a big performance but the Black Swarm came up big when their number was called. With under a minute remaining in regulation, the Bulldogs attempted a two-point try that would’ve surely sent the game to overtime. Instead the Blazers defense forced the high powered offense to stall out securing VSU’s fourth national championship. This game was the close to a truly storybook season.

While the entire world is in the midst of a fight against the life-threatening virus ...