Home / Sports / Intensity could get the Blazers back on track 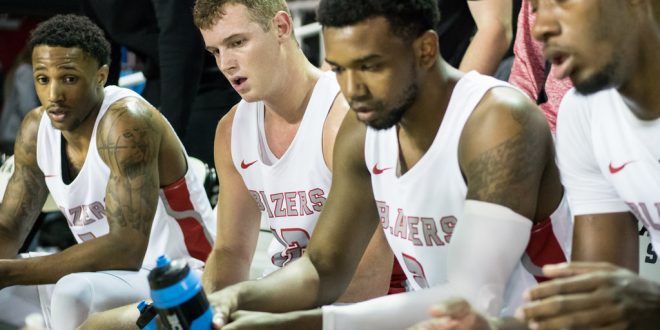 The Blazers have lost two consecutive games for the first time this season.

Intensity could get the Blazers back on track

The Blazers have lost their fire.

After starting the season 9-0, the Blazers have registered a 4-4 record over their last eight games. It isn’t a huge nose dive, but it certainly isn’t normal from one of the Gulf South Conference’s best teams.

The term that could sum it all up – intensity. It’s definitely left the Complex, and players are taking notice.

“I could agree that intensity is what we are lacking right now,” Beau Justice, who’s averaged 18 points over the eight-game stretch, said. “Once we get that mentality, we should be good.”

The play has been there for the Blazers. The problem is that they are making small mental errors that ultimately have big impacts on the game.

During their slump, the Blazers have fallen in their steals production. The first nine games of the season, the Blazers averaged eight steals per game. The last eight games, only six per game.

Their defense has taken a major hit.

“We have all the ability in the world to be a great team. We just have to stop people,” Justice said. “We only have the intensity during the last two minutes of games. As one of the leaders of this team, I have to do a better job of getting the guys ready for war every single night.”

And for the rest of the season, the Blazers will be faced with teams that want to wipe them completely out of games.

Head Coach Mike Helfer is ready for the challenge.

“It isn’t going to get any easier for our guys, but once we honker down and get back to our brand of basketball, we should be good,” Helfer said. “Our best ball needs to be now and for the rest of the season, for sure.”

With 11 games left in the regular season, the Blazers could make a run. The only teams that have beaten VSU, and will play once again before the season’s end, are Delta State and West Georgia.

The Blazers will have time to correct their mistakes. At 13-4 and holding the fourth spot in the conference standings, they aren’t at the bottom of the totem pole.

It is still time left.