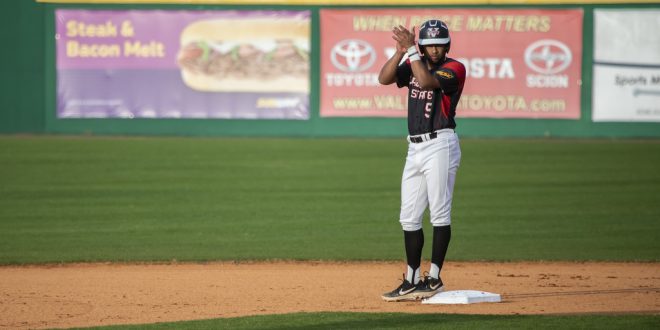 VSU baseball’s hot start to the season was put on hold by Lee University, as they dropped two of three on the road.

The Blazers opened the series with a 5-0 win on Feb. 15, as they surrendered only three hits, and took advantage of four Lee errors to score four unearned runs.

After sitting second in the Gulf South Conference with an 8-1 record, the Blazers took a tough blow after losing both games in a double header by scores of 2-1 and 5-1.

VSU fell to sixth in the GSC standings early into conference play following the loss.

The Blazer bats really struggled to get going in the series, as the top three batters in the lineup hit a combined 5 for 32 over the three games. Four errors over the two losses added to the Blazers demise, as well.

VSU came into the series one of the best hitting teams in the conference.

On the mound, VSU got a sensational performance from junior Tristan Cone, who pitched six innings of one hit ball, and contributed five strikeouts.

In relief, junior Bryce Van Horn delivered a combined two innings in two relief appearances and gave up only one hit.

VSU will look to bounce back on the road against Saint Leo University. Saint Leo is ranked No. 23 in the nation and in a common opponent swept Lee University earlier in the season.