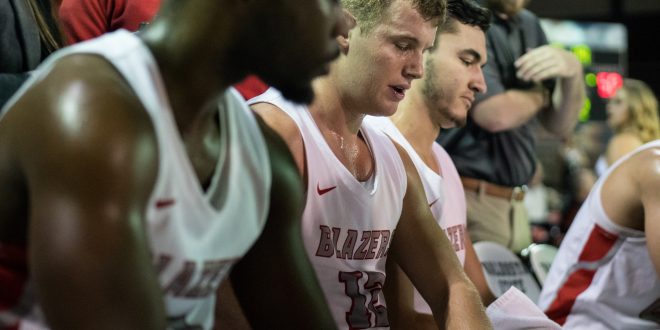 Winston Morgan and Beau Justice have combined to be one of the best backcourt duos in the Gulf South Conference.

Two-thirds of the way through the season, 22 teams have been served a meal of defeat, seasoned with salt and pepper.

“Salt and pepper” refers to the backcourt tandem of Beau Justice and Winston Morgan, who began terrorizing opposing defenses during the 2017-2018 season.

Justice and Morgan have become a recognizable duo that now works better together than as single parts. When those parts come together, the rest of the team sees the benefits.

Much like salt is for dinners, Justice is the first option on the Blazers offensive dinner table. With handles, speed, shooting prowess and the on-court IQ of a seasoned veteran, there is simply a lot to manage against him.

As far as shooting goes, Justice finds every avenue to shoot the three-ball, whether it’s off a screen, fast break or spot up.

Standing at six feet two inches tall and weighing in at 175 pounds, Justice does not look physically imposing.

But defenders become aware of the rude awakening as Justice sneaks up in the stat sheet for 20-plus points on any given night.

Salt has its pros and cons, depending on your taste buds, but Justice fits the comparison.

At the dinner table, pepper is the second option but can be considered more potent than salt. Morgan doesn’t score as much as Justice, but when he chooses to put up a shot from beyond the arc, it’s more likely to go in.

“[Justice] is my partner,” Morgan said. “He is my salt. He comes in big for me when I [don’t] have to. I just have to control my team and be a point guard.”

Last season, Morgan made 106 three-pointers, which is No. 1 in VSU basketball history. He is the first to ever eclipse the century mark. Justice added 88. Both have continued to shoot at a similar pace this season.

Often, one of the two gets hot in the first half, while the other lights it up in the second half.

On Feb. 16, Morgan scored 15 points in a 90-74 victory over the Delta State Statesmen. All of his points were scored in the first half, including five threes.

Justice scored 27 points in that game, getting hot and scoring 15 in the second half.

Morgan started and Justice finished for the Blazers.  Even when one is not making shots, there is still an effectiveness in other areas.

“I really think people underestimate someone’s presence on the court,” Justice said. “For example, sometimes my presence gets other people shots. They may run at me and not run at someone else. [Morgan’s] presence, mentality and effort allow him to take over a game from the point guard spot.”

Head coach Mike Helfer feels the salt and pepper duo is great for the Blazers.

“You kind of hear some of that stuff, but they are just really good friends,” Helfer said, laughing. “I think they enjoy playing with each other. What they have done for this program these past two years together has really been incredible.”

While Justice and Morgan enjoy playing basketball together, off the court is where their friendship thrives.

“They are definitely leaving their mark as people and as players,” Helfer said.