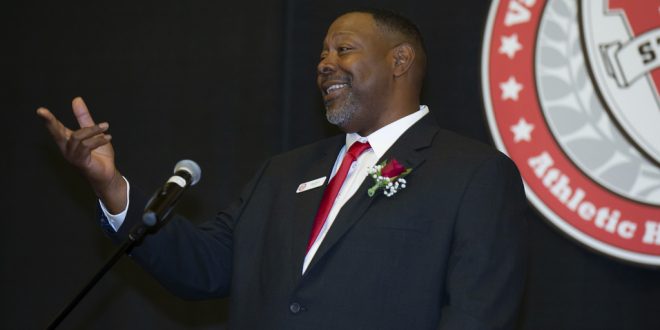 Leon Jones was inducted into the VSU Athletics Hall of Fame on Feb. 16.

The only way out was death.

Through 1983-1987, forward Leon Jones was the heart and soul of Blazers basketball. At six feet and six inches tall, the Watkinsville, Georgia, native was a football player before finding his love in hoops.

A love that made him an unstoppable force, as he holds the record for the best career field goal percentage in VSU, which was then Valdosta State College, history, with 59.7 percent.

Under head coach James Dominey, Jones solidified himself as one of the best scorers and rebounders in school history. There was simply no one who outworked Jones on a given night.

“[Jones] is what Valdosta State basketball is all about,” Dominey said, in a program from 1986. “He gives maximum effort. He is a physical player who excels at rebounding.”

The effort ultimately led to becoming one of nine players in VSU history to score upwards of 1,500 points for a career. In scoring average, Jones ranks eighth of all time, with 14.6 points per game.

During his junior year, Jones scored in double figures in 19 of 25 games for the Blazers. One of those games was, arguably, his best, as he dropped 25 points and added 14 rebounds in a 90-80 win against Troy State.

In 1985 and 1986, Jones was named as the team’s Most Valuable Player and to the All-Conference team.  Also, he led the Blazers in scoring and rebounding for two consecutive seasons.

According to Dominey, every good thing that was said about Jones during his playing days was absolutely true.

Once Jones left in 1987, he took his talents overseas.

“I played basketball 15 years in South America, and I got a chance to learn a lot,” Jones said.

His ferocious energy and hustle allowed him to get his athletic abilities on the big stage. But his time overseas did not compare to joining the Hall of Fame, 32 years later.

“This is a very big honor for me,” Jones said. “From the time I stepped foot on this campus, I didn’t want to leave again. I had other schools that wanted me, but Valdosta was the place.”

On Feb. 16, Jones was enshrined at VSU. For Dominey, it was a foregone conclusion.

“Leon is liked and respected by everyone who knows him,” Dominey said. “He is easily one of the best to ever play at Valdosta State.”