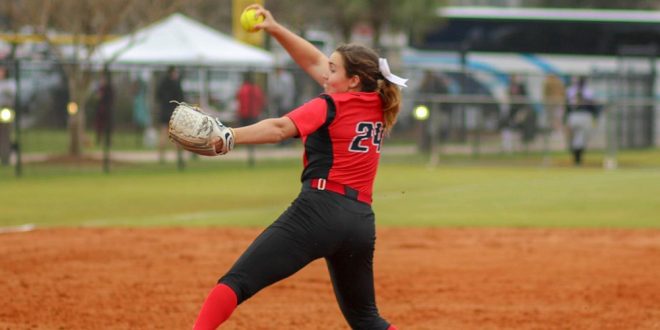 Van Auken and the rest of the Lady Blazers will play a doubleheader on the road at Flagler College on Feb. 27. The first game will begin at 3 p.m.

Whether it’s the two mile jog the pitchers make at the beginning of each practice or taking the mound against the lead-off hitter, she has maintained one goal: domination.

“I’m a competitive person,” Van Auken, a sophomore, said. “I always want to win and be the best no matter what I’m doing. I left USC Upstate because I didn’t want to be the fifth pitcher on the roster. I’ve always wanted to control the game.”

Freshman year was a tough time for Van Auken. She was the third pitcher in the rotation and was looking at a future of moving further down the roster.

“Softball was all I knew at the time, and I wasn’t ready to give up on competing every day,” Van Auken said. “It was a dark time for me. Being so far away from my family, especially my four-year-old brother, Easton, and not being able to compete as much as I wanted. My coach and I agreed that a fresh start was probably for the best for me, and I began to look at transferring.”

She looked into transferring back home to Tampa University so she could be closer to her family, but she also looked into VSU. That is when she met VSU coach Thomas Macera.

“When I came to visit campus I didn’t really know what to expect,” Van Auken said. “I came out and threw some pitches for coach, and within an hour he was already improving some of my pitches. That’s when I knew that this was where I wanted to be.”

She hit the ground running with the team and began to compete for one of the starting pitcher spots in the fall.

Van Auken has taken a liking to Valdosta, feeling better about being closer to her family and enjoying her time on campus. She has even decided on a nursing major.

She has especially enjoyed her time with the team and respects the guidance and leadership of Coach Macera, whose intensity to practice and preparation has led her, and every pitcher on staff, to stay focused and play at her best in every appearance.

“I’ve enjoyed just being with the team,” Van Auken said. “At my old school, we would just pitch for a couple of hours and go home, but pitchers stay the entire practice here, which is new for me.”

For her time at VSU so far, Van Auken understands the value of preparation.

“I pitch and field ground balls with the team,” she said. “Coach always said that ‘a ground ball is a ground ball, no matter what position you play,’ so he always wants us to stay prepared.”

“I’ve never won in-season awards like this,” she said. “It’s so incredible. It’s nice to be recognized for me and my team’s accomplishments so far this season.”

Not only does she have the accolades but also the statistics to back up her start as the bona fide ace of the rotation. She leads the Gulf South Conference in wins, with six on the year. In addition, she mixes a devastating changeup with three different curveballs to lead the conference with 50 strikeouts in only 44.2 innings.

Van Auken and the entire staff has contributed to the Lady Blazers having the third best ERA in the nation at 0.97.

Not only has the conference taken note but so has the NCAA. VSU’s pitching has vaulted them to the No. 7 ranking in the nation in the recent poll updates. But Van Auken still only has one goal on her mind: winning.

“Despite all the new players, I do think we have what it takes to win a second straight conference championship,” Van Auken said. “Between our deep pitching staff, our wide variety of bats in the lineup and a defense that is really starting to come together, we can go very far this year. Maybe one day even a national championship.”

She still has two more years to accomplish that feat.

Previous Jones gave ‘maximum effort’ on the court
Next ‘We saw this as an opportunity’: VSU opens Learning Commons