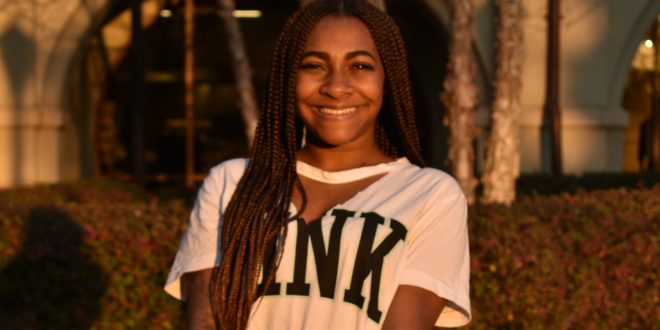 D'Layna Jonas graduates on Dec. 14 with an interdisciplinary studies major and a Spanish minor. She plans to go to graduate school though she doesn't know which school she wants to go to next.

“No matter what keep pushing.”

It’s with these five words that senior D’Layna Jonas describes herself and her life’s journey up until this point.

Jonas is slated to graduate on Dec. 14 with an interdisciplinary studies degree, and after her four years spent at VSU, she can heartily say, “It’s time for me to go.”

“I just feel like I’ve reached all the goals that I can,” she said. “It’s time for me to take what I’ve learned and [go] elsewhere.”

Jonas’ college goals included learning about psychology, helping her community and campus and building up leadership skills, all of which are things she’s done in one way or another.

She’s taken many psychology classes, committed to volunteering in organizations like Black Student League and helped give students a voice in Student Government Association.

“She does a really good job of separating friendships from business work,” Williams said. “When it’s time to get serious, she does a good job at being serious.”

“When I came to college and started working with children more, I started getting a love for [them],” she said. “So, I really want to go into helping them figure out what’s going on with them.”

Ultimately, she dreams of opening a cognitive behavioral therapy practice with programs specifically tailored to children and their disorders. This ties into a deeper quirk inside her personality, something of which friends, family and even those outside her circle take notice: caring for others.

Best friend, Tau Beta Sigma line sister and roommate Clinesha Sims said Jonas has a deep love for people and often uses it to give back as much as possible.

“She’s the person who would give the shirt off her back, if she could, to anybody in need,” Sims said. “If she’s got it, she’s going to give it to you.”

Never a transactional person, Sims characterizes Jonas as “uplifting” and someone who’s always trying to make sure everyone’s voice is heard. She goes so far as to give those looking for opportunities one to take charge of.

Williams was one of those people. She was NAACP’s political action chair from 2016-2017 but had to withdraw from VSU in 2017, leaving her position. When she came back in 2018, Jonas made it like she never left.

“She reached out to me and allowed me to have my position back,” Williams said.

She isn’t the only one who Jonas has helped. In fact, she always tries and manages to give those in need a platform for their craft.

“D’Layna has done a lot for a lot of underclassmen here, like getting their name[s] out [and] also giving them opportunities to break out of their shell,” Sims said.

But Jonas’ story of giving back didn’t begin here. Though we started this story in medias res, her story began in the Virgin Islands, specifically St. Thomas.

There, she lived with her mother who taught her to always persevere, keep her head held high and that no matter the situation, it’ll always get better.

“I always [keep] that in mind going through any situation I go through today,” Jonas said.

Later, she moved to McDonough, Georgia, where she lived up until her college years, beginning in 2015. Between then, Jonas, a self-proclaimed nerd, took part in band as a percussionist in wind ensemble and color guard member for marching band.

Her college senior year is the first time she hasn’t been in band since before high school, though it’s provided gateways to her interests.

Teaching band camps during her summers was what made her grow closer to children. However, while everything seemed “hunky-dory,” it wasn’t meant to stay that way.

Romans 8:18 states, “For I reckon that the sufferings of this present time are not worthy to be compared with the glory which shall be revealed in us.” For Jonas, that verse resonated with her and did so even more when her father died in 2016.

It was her biggest battle, especially since she lost him early in her college career.

“Losing a parent is just…,” she said, pausing. “There are no words to describe how that feels.”

A roller coaster of sorts, Jonas’ life became “hectic” for a while, but she knew she had to get it together. So, mentally, she stood firm, dug down her heels, remembered and recited Romans 8:18, making it her motto.

Now, she just looks ahead to her future, particularly towards traveling.

“I really want to travel so badly,” she said. “[And] I don’t mean just statewide. I mean literally out the country—everywhere.”

Jonas eventually hopes to have a map where she can track and put a pin on every location she’s ever been to. Her all-time must-see destination is Bora Bora, specifically the Four Seasons resort.

She hopes to one day sit back and relax in one of the resort’s bungalows overlooking the shallow waters.

For the moment though, she sticks to looking at her immediate future: graduate school.

“I am working on getting into grad school, so I’m looking into getting different grad assistantships to see how I can pay for grad school,” Jonas said.

She’s yet to apply to a grad school but knows she definitely doesn’t want to go back home in McDonough.

“I might end up going here,” she said, hesitantly. “But I’ve always wanted to go to Florida State.”

Whether she decides to stay at VSU or move on to FSU to spread much needed kindness, it’s safe to say Jonas will be remembered on Valdosta’s campus. Even if she didn’t believe so, Malik “Brodii” Prowell would remind her of how much she’s done for him.

“D’Layna to me is a person I can always go to to get a smile, one, and two, to be blessed,” he said. “[She] is probably one of the happiest [and] most religious people I know. I thank her for that.”

Prowell met Jonas through BSL and has since found her to be someone to look up to. In his own words, “she keeps a lot of people straight” at VSU.

With graduation coming up in 11 weeks, Jonas can accurately say that she’s affected many lives on campus. And no matter where she ends up, one thing is for sure: she’ll keep pushing forward.

Previous ‘We saw this as an opportunity’: VSU opens Learning Commons
Next All-Star Weekend features Hoops and Haven