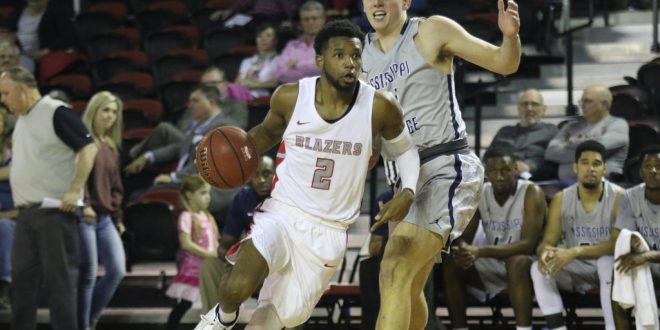 The Blazers have a 23-5 record going into the GSC tourney.

Coming into 2019 season, I had the Blazers ranked in the top-three of teams in the Gulf South Conference. My No. 1 was not the Blazers.

Jimmy Kodet, Justin McBride and KJ James were lost to graduation. Also, the Blazers had just suffered one of the most disappointing loses I had ever witnessed at the hands of Eckerd College in the NCAA Division II tourney.

At the time, Beau Justice and Winston Morgan were juniors. They combined to score just 22 points.

Justice, the reigning GSC Player of the year, did not perform to his abilities in the game. He missed all of his three point attempts. The sniper that he was from distance all season long did not show up.

The lose destroyed them. Players went over to family and friends in attendance of Forbes arena at Morehouse College in Atlanta, Georgia and sat in sorrow.

The DSU Statesmen defeated the Blazers 106-90 in the GSC semifinals round last season.

The opening practice for the Blazers is where I began to think the narrative would take a monumental shift. Instead of McBride, there was a newcomer in Bryce Smith.

Out goes Kodet, in comes junior transfer Darrell Jones. Clay Guillozet took the place of James and it was a smooth transition.

Ironically, the Blazers stole Keshawn Ingram from the Tritons and he has been the x-factor they could’ve ever asked for. Ingram, Desmond DeRamus and Goree Venable have been main stays in the Blazers’ bench unit.

Did I mention that Justice and Winston make up the best backcourt in the GSC? Well, they have become more effective this season.

Morgan ranks No. 2 in the GSC in three-pointers made this season with 98. Last season, he dropped 106 to break the all-time school record for threes made in a season.

The first player to ever past the century mark. In year two, he could do it all over again.

Justice is still a Player of the year candidate averaging 21 points per game, ranking No. 2 behind West Georgia’s Marquill Smith (27 points).

The regular season came to a conclusion for VSU on Feb. 28, defeating Auburn Montgomery 101-84.

Once again cutting the net as GSC regular season champions for the third consecutive year.

Yes, I expected the Blazers to make the playoffs, but not as the No. 1 seed.

Much of the credit goes to Head Coach Mike Helfer and the rest of the staff for regrouping and finding talent to fill holes in the roster.

As high paced as the offense can be, they have a fairly balanced attack. Smith and Jones do most of the work down in the paint, with the perimeter players like Justice and Morgan knocking down shots.

For the typical fan, it just seems that they go out and freelance. In most instances, that’s the case.

Late in games, Helfer will call up a play and normally, it’s effective.

On fastbreaks, they are actually comparable to last years squad. Kodet would trail the sideline waiting for the pass and knock down a three pointer. Justice and Winston have continued to do the same.

As stated before, the Argonauts and Statesmen rounded out the top-three teams in the preseason rankings.

DSU ranks No. 5 and UWF missed the playoffs, ranking No. 9. Only the top eight teams can get in the tourney.

The Blazers are in, even though I underestimated them.