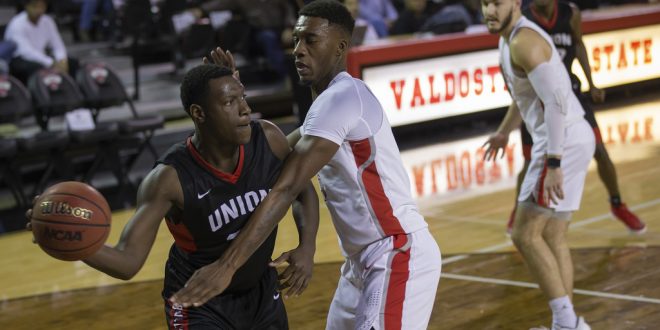 For the Semifinals matchup on Saturday, March 9 the Blazers will play the fifth-seed Statesmen that are coming off an upset win over the fourth-seed Christian Brothers.

After igniting for 20 points in the final seven minutes the VSU Blazers survived their quarterfinal battle at home against the Union Bulldogs in a 92-76 victory on Tuesday, March 6.

That win advanced the Blazers to the Gulf South Conference tournament semifinals, where they’ll face Delta State in Birmingham, Alabama.

As soon as the game tipped off VSU was firing on all cylinders, jumping out to a 17-point lead within the first 10 minutes.

It felt like the typical top-seed beats up on the lowest seed type of game, until Union retaliated with a three-minute run that cut VSU’s 25-9 lead to 25-24.

Union’s confidence was revived, and they kept the score close, entering halftime down by just six.

The Bulldogs continued to ride their momentum in the second half and eventually seized a three-point lead with 15:22 to go.

“I thought we lost the respect for them a little bit because of the quick start,” said VSU Head Coach Mike Helfer. “We’re usually not good when we don’t respect our opponents. We needed to get that respect back, and I think once they took the lead on us our guys responded to that.”

Union’s lead was short lived, lasting just 1:02, but the score was kept close.

VSU’s resurgence started with the performance from the big man down low, Bryce Smith.

He had himself a night with 17 points, seven boards, and was the energizer for the team.

The matchup between Smith and Union’s LiDonta Hicks-Gentry turned out be a lopsided one as Smith’s sheer physical dexterity clearly couldn’t be matched.

“The big man really couldn’t guard me,” Smith said. “I felt like I was better than him. I didn’t play that good the last game we played them, so I knew I had to play good this game.”

Smith opened the half going directly at Hicks-Gentry. Smith backed down to his spot and finished with a gentle left hook in the paint. He then converted an and-one over Hicks-Gentry on the following possession.

Smith was visually amped up throughout the second half and Union didn’t have an answer for him, or the rest of the Blazers.

For his final points of the game Smith buried a three to put the Blazers up seven. His last bucket then ushered in a scoring bombardment that put the game away for good.

The following act was a barrage of threes from VSU’s usual suspect, Beau Justice.

Justice was unconscious in the final seven minutes and dropped 17 straight buckets. He shot 5-6 from downtown and 4-4 from the free throw line for a total 19 points during his takeover stint.

Justice finished as the leading scorer with 35 points, marking the fourth time he’s scored 30 points or more this season. He moves into No. 5 all-time in scoring at VSU.

Simply put, Beau was being Beau.

For the Semifinals matchup on Saturday, March 9 the Blazers will play the No. 5 Statesmen that are coming off an upset win over No. 4 Christian Brothers.

Winner of that game will play for the GSC Championship on March 10.