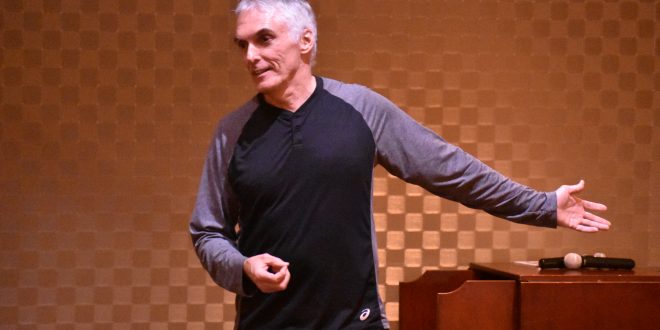 Jay Atkinson discusses the craft of narrative writing at VSU.

An award-winning author added another page to his story when he visited VSU earlier this month to talk about how his own experiences shaped his newest work.

New England author and Boston University professor Jay Atkinson visited campus on March 13 and 14 to discuss the craft of narrative writing, give a reading, and sign books. He has published eight books, and his journalism has appeared in the New York Times, Men’s Health and Boston Globe.

His most recent effort, “Massacre on the Merrimack,” tells the true story of Hannah Duston, a Massachusetts colonist mother of nine who not only survived a raid by the Abenaki people of Quebec, but returned to kill and scalp 10 of the warriors.

Hannah became a local legend. A statue of her is erected in Haverhill, Massachusetts, where the massacre took place. Her status as a larger-than-life character of the American pioneer spirit is what compelled Atkinson to tell her story.

“That happened in the next town over from the town that I grew up in, so I grew up hearing the story,” Atkinson said.

What followed were two years of grueling research of Native American weapons and tactics, consulting only three existing primary sources and decades’ worth of historical texts.

“I’ll never do it again,” Atkinson said. “I don’t want to talk about it anymore.”

Despite the author’s feelings, the book garnered much critical acclaim. Publisher’s Weekly called Atkinson’s storytelling skills in the book superb, stating “he crisply moves from events in Haverhill across the panorama of colonial rivalries in North America to Hannah’s captivity experiences.”

Although “Massacre on the Merrimack” is his latest publication, it’s far from his first. A lifelong outdoorsman and athlete, Atkinson’s memoirs often focus on his time playing ice hockey and his 30-year rugby career.

He played everywhere from Florida to Ireland, where he met many of his lifelong friends, like the ones who fly in from across the US to go play pond hockey in zero-degree weather or go ice climbing at Crawford Notch, New Hampshire.

Atkinson has written extensively about these and other “DIY outdoor activities” in NHmagazine.

What Atkinson provides throughout his prose is a witty, romantic and experienced style to an otherwise no-nonsense and rugged cast of New England characters and situations. This is due in large part to his upbringing as a first-generation college student in a small Massachusetts town.

“Mostly I’m writing about blue-collar working people because that’s the world that I grew up in: people on the margins of society,” Atkinson said, describing his book “Legends of Winter Hill.” It’s about the notorious outlaw cop Joe McCain and his struggle to lock up Boston’s worst criminals, including crime boss Whitey Bulger.

While the stories were second nature, the way in which Atkinson told them did not always come easy.

In ninth grade, Atkinson was told by his teacher that his story was “the only one in the class that made sense” and was encouraged to become a writer.

But it was Harry Crews, the University of Florida creative writing master, who would later become Atkinson’s most influential mentor.

The son of Georgia sharecroppers, Crews served in the Marines in the 1950s and went on to become a successful novelist and, eventually, a notoriously stringent professor at UF whose classroom was often a literary boot camp. Margery Lohmar, a student at UF in the late ’60s and a current VSU student, recalls her first experience with Crews.

“His opinion of our writing abilities was apparent early on when he returned the first of our writing assignments in individual baggies, torn into tiny pieces,” Lohmar said.

Atkinson said, “People were leaving places like NYU’s Creative Writing program and places like Iowa, which is one the most famous in the world, to come to study with Harry. It’s like going into the Marines. If you take it, you’ll come out a narrative writer.”

Atkinson clung onto Crews’ every word.

“Having him as a teacher was an amazing stroke of luck,” Atkinson said. “There’s an old Chinese proverb, ‘When the student is ready, the teacher will appear,’ and for me it was Harry.”

Atkinson credits Crews with making him into the writer he has become today. Because of Crews’ hard style, Atkinson was able to forge the nuanced and expressive voice he uses in his writing.

“I would go to his office for hours and not to be praised,” Atkinson said.

When talking to VSU students, Atkinson encouraged them to latch on to a professor and learn all they can from them, as he does for his students in Boston.

“That’s an extra benefit,” he said. “You’re paying the same tuition, and you’re getting another masterclass for free.” 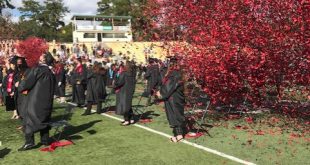 Photos: Over 1,300 graduates received their degrees at face to face fall graduation

Approximately 1,000 fall graduates and 300 returning spring graduates walked across the stage at Bazemore-Hyder ...