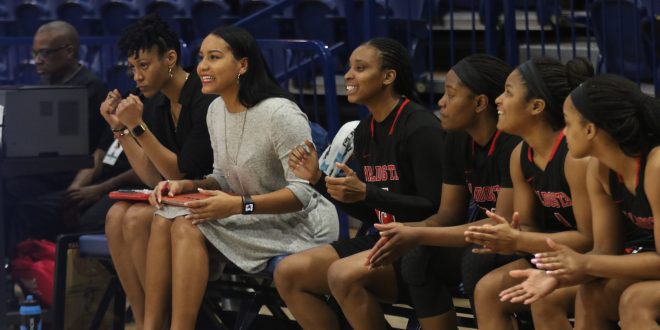 The Lady Blazers set their sights to training camp.

Lady Blazers’ have time to regroup

As March Madness comes to a close, fans of the VSU Lady Blazers basketball team are left wondering about the team’s future as it sits out this year’s NCAA tournament.

The snub follows the Lady Blazers’ loss in the GSC tourney to Lee University at the Gulf South Conference in Birmingham, Alabama.

The Lady Blazers put up a strong fight but unfortunately sizzled out at 81-73.

The Blazers played Lee earlier in the season with another loss of 61- 72.

The team has had its fair share of wins and loses throughout the season, winning a total of 21 games out of 31. Many of these wins were home games.

A strong winning streak of four games would carry the team up to the fatal loss to Lee.

Despite the Lady Blazers’ exclusion from this year’s NCAA tournament, the season was not in vain.

The Lady Blazers’ won a total of 1941 points this season overall averaging 62.6 points per game.  Also notable for this season was a total of 244 steals, 39 more points than opposing teams played this season as well as an impressive 1263 rebounds.

This season’s overall record of games stands at 21-10.

So, what kept the Lady Blazers from the NCAA tournament?

With steady statistics and victory in half its games, the team does not slack off.

Had a few more games been won the Lady Blazers could have secured its place in the NCAA tournament.

However, there’s plenty of time to condition and prepare for the upcoming season.

Previous The Blazers’ next step
Next Healy, Blazers come with vengeance to Pensacola