Home / Sports / The Blazers’ next step 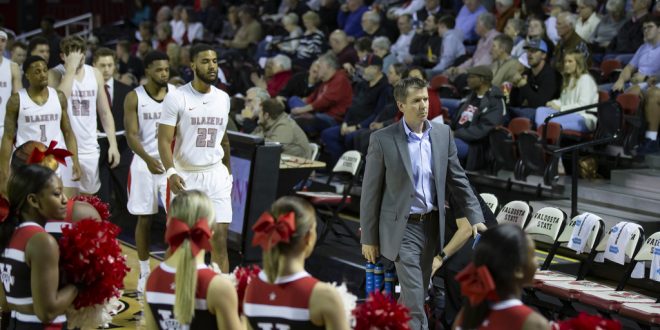 The Blazers will have to incorporate a new crop of faces to an already good squad.

The Blazers’ next step

And for the third straight season the Blazers left the GSC tournament empty handed along with being eliminated in the first round of the national tournament.

Now with seven seniors graduating, including star guard Beau Justice, the Blazers’ future is in limbo.

Justice was the fire marshal of the Blazers.

In his three seasons at VSU, he averaged 18.7 points per game and made 41.4 percent of his three-point attempts.

Losing Justice will affect the Blazers as they will not be able to rely on his heroics and volume scoring as much as they did this past season.

The departing players made up for 63 percent of the Blazers’ points scored in their 2018-19 campaign.

The Blazers will have a starting with the trifecta of rising senior Forwards Clay Guillozet, Bryce Smith, and Darrell Jones.

Guillozet will be the leading scorer out of the holdovers from the previous season, averaging 13.1 points per game for the year and added 6.8 rebounds a game.

Smith was a role player last season but strived at it.

Starting only seven out of the 31 games, Smith averaged 10.2 points and 4.7 rebounds per game.

Darrell Jones was a rotation player this season, starting 12 of his 29 games played and averaged 10.1 points and 5.2 rebounds per game to the Blazers.

Venable averaged 6.7 minutes per game and Nabers and Gallon saw no minutes this season.

The question is simple.

Where does the Blazers go from here?

They cannot rely on the success of Beau Justice anymore.

It’s now up to the other guys to show what they’re made of without having Beau Justice as a crutch when they struggle.

Next season will be a real test as Coach Helfer will have to dig in his bag of tricks in terms of recruitment and in-game rotations.