Home / Opinions / Column: The interest will be high for Helfer 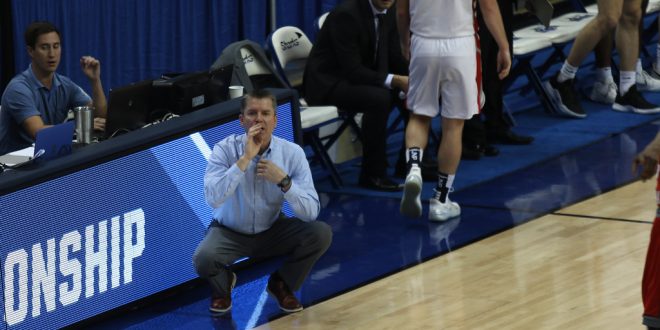 Column: The interest will be high for Helfer

Bent down, usually at the end of the Blazers’ bench, is an observant.

Observing the screens, cuts and movements of his team, head coach Mike Helfer is a student of the game.

For 14 years, Helfer has coached the Blazers, averaging 20 wins a season. Since 2017, the Blazers have made an appearance in the NCAA tournament.

In the Gulf South Conference, Helfer is the leading head coach, depending on who you ask. Year in and year out, Helfer and the Blazers are top-5 in the conference.

In year 15, Helfer has to put the Blazers over the top. It may be his hardest year yet.

Losing seven players to graduation has depleted the roster. The likes of sharpshooters Beau Justice and Winston Morgan will be hard to replace in recruiting.

Greg Zuppas, Keshawn Ingram, Desmond Deramus and others will not take the court under Helfer.

That leaves Clay Guillozet and Bryce Smith as the 1-2 punch next season, assuming Helfer and staff fail to acquire other marquee talent.

For two straight seasons, the Blazers ranked No. 1 in points per game, with over 90 a game.

Each night, the Blazers were easily the best shooting team on the floor. But that could all be over.

Soon, another team could have that luxury.

According to Andrew Doughty, writer for Hero Sports, Helfer is a strong target for the head coaching gig at Mercer University. Mercer fired head coach Bob Hoffman on March 11.

There have been no details on whether Helfer has engaged in the talks, but his winning ways will always garner attention.

At VSU, Helfer holds a 251-131 record. He has 12 winning seasons with the Blazers on his resume and has continued to put the Blazers in the national spotlight.

Helfer is revered in the basketball world, so his services will be vital somewhere.