Home / Sports / Coaches and players respond to first scrimmage of 2019 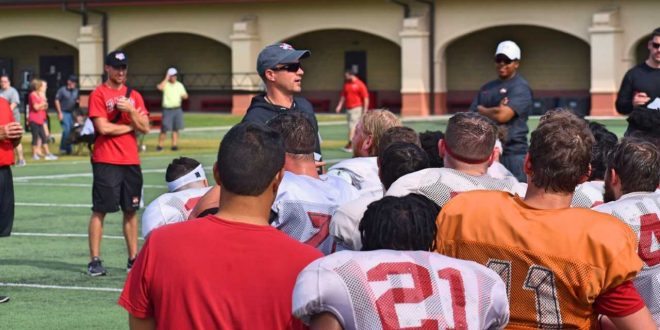 The Blazers next scrimmage will be on April 19 at 6 a.m. on the practice fields as they prepare for April 27’s Spring Game.

Coaches and players respond to first scrimmage of 2019

The Blazers capped off their first two weeks of practicing by holding their first scrimmage game on April 13.

Gearing up for the regular season, with five new coaches on the coaching staff, the Blazers will face an adjustment period to newly hired Head Coach and VSU alum, Gary Goff.

Saturday was the first chapter, implementing the new system.

“We’ve only been practicing for two weeks and are just scratching the surface on our offensive and defensive schemes,” Goff said. “We’re purposely being basic right now to get comfortable with the foundation of both sides of the ball then we’ll look to add more stuff as they get more comfortable.”

Goff was pleased with the versatility of the offensive lineman.

“We’re moving a lot of people around up front and playing guys who didn’t get much playing time last year,” Goff said. “Some guys are playing positions they’ve never played up front and they did a great job, overall.”

Quarterback Rogan Wells felt that the Blazers are putting in extra time to learn Coach Goff while maintaining high energy throughout spring practice.

“I see a lot of energy as we came in with new coaches,” Wells said. “You may not like the system but we’re putting in the extra time to really understand it.”

From Kerwin Bell to Goff, the switch fairly easy.

“I feel that they’re kind of the same,” Wells said. “Coach Bell was more of a yeller and Goff is more reserved but they’re pretty much similar.”

“We have a lot more energy on the sideline,” Mozone said. “It transfers to the field and allow us to do what we do.”

The Blazers hired Lee Stalker as the Defensive Coordinator to replace Danny Verpaele, who accepted a job at Kennesaw State to be the Safeties Coach in January.

Mozone praised how Stalker focused on the entire defensive instead of one specific position.

“He doesn’t just focus on the defensive back’s and skills players and we’re more into the defense this year because we have more of an understanding,” Mozone said. “It helps us to make a lot more plays by knowing where the fits are.”

The Blazers next scrimmage will be on April 19 at 6 a.m. on the practice fields as they prepare for April 27’s Spring Game.