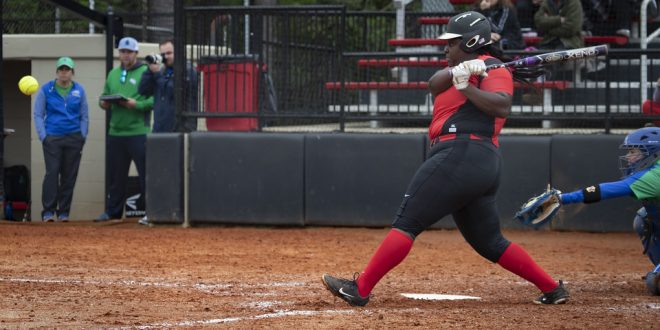 Aaron is in her junior year at VSU. The Lady Blazers are 30-12 on the season.

As the softball season continues, all eyes are on Dream Aaron.

The 5’ll power-hitter hails from Chicago, Illinois and has kicked off her first semester at VSU as a stellar softball player.

Apart from her statuesque frame, the first thing that stands out about Aaron is her unique name.

“It was always my mom’s dream to have a girl as her first child,” Aaron said. “When I was born she didn’t know what to name me yet.  Then it just clicked that Dream was my name.”

In addition to giving her an unforgettable name, Aaron’s parents played an important role in getting her involved in the world of sports.

“My mom and dad were very hard on me and my sister on playing different sports,” Aaron said.

While Aaron has dabbled in basketball, softball remains her true love. After one year playing softball, it just stuck.

Aaron’s batting skills is what has undoubtedly thrust her into this season’s spotlight.

“A lot of the times the pitchers won’t even pitch to me,” Aaron said. “I get walked a lot. In the game of softball, power-hitters are great to have. I like being that role of being able to help my team whenever I can.”

Contrary to popular belief, softball is much more than just a ‘girl’s” version of baseball.

Aaron describes the game of softball to be more intricate and difficult than its masculine counterpart.

“Softball, to most people, is a little bit harder,” Aaron said. “We have shorter bases and the time to react from the pitcher throwing the ball to hitting it is way shorter than baseball.”

The practice and conditioning are also anything short of light. Aaron practices with her team nearly daily for three to four hours to perfect hitting and fielding situations.

She maintains her strength through lifting weights.

While Aaron believes a misogynistic stigma exist around the sport, she insists that softball is gradually attracting males.

“I do think more men and are starting to play softball,” Aaron said. “I think that’s cool.”

As Aaron revels in the peak of her softball career, she warns that the ride does not last much longer beyond collegiate years.

“To make a career out of it is kind of unrealistic for girls,” Aaron said. “We don’t get paid as much as baseball players.”

Like many other colligate players, Aaron plans to focus on her career once she sets down the bat.

She has set a goal of becoming a civil engineer but has not ruled out play pro for a few years after college.

Though softball isn’t forever, Aaron feels the sport has made a lasting impact on her life and has equipped her will skills both on and off the field.

“Softball is very personal to me,” Aaron said. “It’s what helped me get to where I am today. It’s taught me life skills about how to deal with failure, adversity, socializing. It’s taught me that through hard work, dedication and preservation you can achieve anything in this world.”