Friday, Valdosta State University announced that Brian Kemp will be its incumbent commencement speaker. Once again, VSU is not “listening” to its students, and I, a member of The Spectator, am baffled. In fact, I find it ironic.

If you take a look at our editorial “Make commencement memorable,” on page two, from Thursday, you’ll see The Spectator’s top picks for speakers. The one we vied for most was Stacey Abrams, and why wouldn’t we?

Abrams came to VSU—twice—to inspire and rally students behind her, whereas Kemp simply came to Valdosta, not VSU, to rally others. 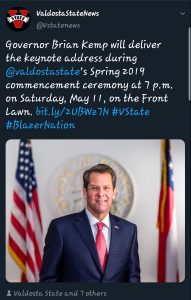 But, it’s not as if he didn’t have any interaction with VSU. He sent a video congratulating VSU’s football team for its championship win and congratulated the team in person at the VSU Capitol Day. That being said, this announcement can’t be a coincidence.

That should make this a good thing, right? I mean, what’s not to love about the Georgia governor speaking at your commencement?

Even former president Jimmy Carter called his actions a conflict of interest running akin “to the most fundamental principle of democratic elections—that the electoral process be managed by an independent and impartial electoral authority.”

I say listen. Yes, he’s republican, and yes, we know who his target election audience was—suffice it to say it wasn’t minorities—but political polarization has done enough to America.

We should open our hearts and minds to listen. Perhaps if we do, we’ll find something to help us on our journeys forward.

Previous Takeaways from the Blazers’ first scrimmage
Next ‘Like a Dream’: Aaron and softball