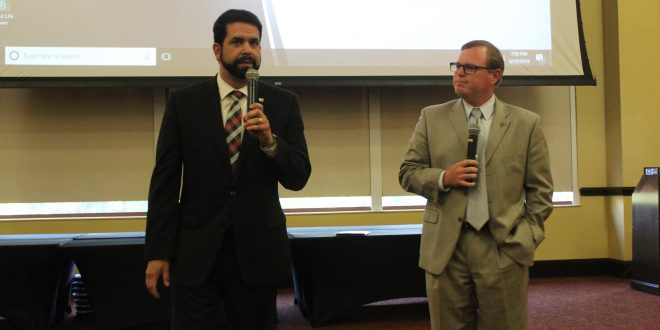 The Commencement Ceremony Town Hall was presented on April 29 to let students voice their opinions on Gov. Brian Kemp being this semester's commencement speaker.

On Monday, April 30,  in the Student Union ballroom, President Richard Carvajal hosted a Town Hall-style meeting on the subject that’s created an undercurrent of tension across VSU’s sunbaked campus – the impending commencement speech to be delivered by Georgia Gov. Brian Kemp. An estimated 200-plus students filled the ballroom. A prayer was held among a few dozen students as the event began. A week prior, the room had been filled with proud parents, a buffet of food in the middle of the room and white cardboard posters all scattered throughout, displaying seniors’ semester-long research projects. But tonight, the atmosphere created by the crowd was different.

By no means was it hostile, or even tense at first. It was a little anxious, maybe hopeful. Most of all, it had the brooding of a shareholder’s meeting. It was expectant, alert. Some of the older students and various faculty moved chairs around, trying to arrange seating for a crowd that must have exceeded the expected numbers by several dozen students.

The event began with a welcome from Dr. Carvajal. Students, one by one, walked to the front of the room to offer questions, complaints and ideas to Dr. Carvajal, and Dr. Carvajal replied directly, with a microphone of his own, to each one. At first, I was perplexed by the decision to host an event for students to speak and only allot them 50 percent of the speaking time, but it’s fair to contend that perhaps Carvajal wanted to create a dialogue between himself and the students. It may have worked for the first few questions. After a few questions had been asked, Dr. Carvajal spoke about his experience growing up as the son of a white mother and a Mexican-American father, and offered something that bordered on empathy, and students seemed to respond. He offered valid points about the value of diverse perspectives and challenging academic environments and said  that the decision would be equally supported by his administration had the school invited Stacey Abrams instead.

After a point though, students grew restless. Many of Dr. Carvajal’s arguments were fair and valid but lost much of their effectiveness when repeated multiple times throughout the night. At least twice, he had to be reminded not to exceed allotted speaking time. Anyone who’s spoken publicly knows its hard to keep track of time while you speak, but the growing tension in the room made me wonder if Carvajal might be milking the clock a little bit. Students started leaving in twos and threes. What had been a hopeful handshake or a solid embrace now gave way to sullen, shaking heads and eye-rolls shared amongst friends.

“It was a waste of time,” said Marcus Turner, a sophomore communications major. Turner, like many students, came to the event hoping for a chance to sway administration, to appeal to reason or sympathy and perhaps even succeed in having Kemp removed as speaker. And if not that, to at least leave knowing that the possibility had been on the table.

“We’re here to see if something can be done. But no, he’s still coming, we’re just going to say some things to make you feel better about it,” Turner said.

As the end of the event neared, Dr. Carvajal ceded his space in the dialogue to allow the remainder of students to speak consecutively. He’d long since lost the room’s engagement; the students themselves had become disillusioned regarding anything substantial coming from the event. The stream of successive uninterrupted speakers invigorated the room. About three quarters of the original number remained, and they cheered like a crowd does for an underdog who is about to lose the game on their homecourt but won’t go down until the last seconds drain off the clock. I suppose there’s something joyous in being united for or against something, even if there’s nothing much to be done about the thing itself.

Dr. Carvajal, to his credit, stayed afterward and spoke face-to-face with students. He remained there when the crowd had dwindled to just a few dozen, while administrators and SGA officials collected the chairs and stacked them in columns throughout the room. I wondered, and still wonder, what he was thinking during those moments, and what he thought about, say, on his drive home. Did he regret the discord the decision created? For that matter, did he regret the poor results of the discussion he’d just hosted? Did he ever once consider, or wish he could consider, changing course on the decision that such a notable contingent of students abhorred? Regardless of all this, the decision to host Kemp as commencement speaker did not change, and it stands as of this writing.

But the hosting of the governor is not the most confusing part of the whole issue. There are certainly substantial arguments to be made in favor and against his appointment as speaker. Wrestling over the ethical concerns concerning politics in an academic setting, student autonomy in managing university-specific events, even the inevitable introduction of the free speech debate – all of it, if considered honestly, makes for a challenging issue to dissect. But being a complex issue itself doesn’t mean the decision is confusing. Nor is it confusing why VSU couldn’t or wouldn’t reverse course, as one could think of plenty of reasons they either can’t or won’t do that. My confusion concerns  the event they just hosted, which seemed only to add salt to the wound, and what it means for VSU’s relationship with its students.

If the result of the event was predetermined, it shouldn’t have been held in the first place. There was a lack of transparency in the decision-making process regarding a commencement speaker, and students saw this as a response to that. But it wasn’t. It was merely a follow-up, a chance for administrators to reiterate the decision while allowing students to feel like they were taking part in something meaningful.

Universities are encouraged to treat their students like the adults they are, and to allow them the chance to make decisions about the university community they live and study in. This is why there’s an SGA, SOI (student opinion of instruction) reviews for professors and an independent, on-campus news organization. And there’s nothing morally wrong with those same students – those same adults – wanting to have a hand in the decision-making process regarding something like a commencement speaker.

As for VSU, selecting a speaker without consulting their students isn’t necessarily a great offense, either – even if they anticipate that the speaker won’t please every last member of the student body. But to do so, coupled with a lack of transparency regarding the process, reveal the selection only a few weeks prior to graduation and then host a meeting that – regardless of intent – served only to insult the students concerned, muddy the waters of discourse between VSU and its student body and corrupt the sentiment that this university regards its students as critically-thinking, civic-minded adults. The act of the meeting could’ve reinforced that sentiment, but the actual results – a group of adults being placated by a governing body – did the opposite.

I’m reminded of the Melian Dialogue by the Greek historian Thucydides, in which the powerful Athenians argue with the humble Melians their decision to exert power over them, contending that it is fruitless to resist the decisions of a group or entity more powerful than you.

“For ourselves,” it reads as the Athenians, “we shall not trouble you with specious pretenses… and make a long speech which would not be believed… since you know as well as we do… the strong do what they can and the weak must suffer what they must.”

At least the Athenians were honest.

Previous VSU to improve retention by controlling the college narrative
Next ‘I made this decision’: Students voice concerns, Carvajal stands firm