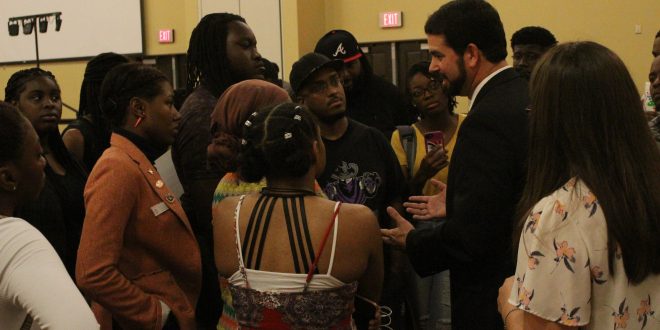 Students surround VSU President Richard Carvajal as they bombard him with unanswered questions, thoughts and concerns after the town hall meeting ended.

‘I made this decision’: Students voice concerns, Carvajal stands firm

President Richard Carvajal addressed over 400 students, faculty and staff in the Student Union ballrooms, and, standing doggedly, he said Gov. Brian Kemp is here to stay as this semester’s commencement speaker.

With almost two dozen students speaking, their points were made; but then again so was the president’s.

Regardless, Carvajal said he took the hearts and minds of his students into consideration.

In a near two-hour long town hall meeting hosted by Student Government and the Office of Diversity and Inclusion, , opinions flew and questions were asked. The biggest question, though, was “Why didn’t you ask students?”

Junior Kiana Johnson resonated with this sentiment herself, after all, seeing students become more politically involved over the course of 2018 inspired her.

“I feel that to invite Brian Kemp out it just seems like a big slap in the face for some students to have received him as the commencement speaker,” she said.

And it led her to ask “Is there anything we can do to prevent Brian Kemp from being the speaker at the commencement this year?” Carvajal was resolute in his decision—it was a no.

He recalled his time talking to other students in the weeks leading to the town hall and of being asked that very same question.

“And I said then that we were not going to uninvite the speaker,” he said. “Gov. Kemp will be here as the commencement speaker for the semester.”

For Carvajal, the commencement speaker was set in stone. Making the best of a bad situation, he stated his “time-honored truth.”

“Good education is by its nature uncomfortable,” he said. “Sometimes what that helps that person do is reinforce their current beliefs. Sometimes it causes them to tweak their beliefs, but only listening to one side of the argument never causes growth.”

The phrase was not met well with students, but a certain realization was made: This event was not about a resolution. However, it wasn’t only to appease students at face value either, according to Sandra Jones, Director of Diversity and Inclusion.

Jones said the town hall meeting was created from the voices of students heard by herself and other professors. At its core the meeting’s most important goal was making administration hear students’ voices.

“If I’m going to people saying these people are upset, it doesn’t have the same impact when you have 150 students come in here [and say] ‘No, this is how we feel,’” she said.

Jones can’t speak for the administration who headed the event, but she can now say that they can’t feign ignorance.

“When I now bring up diversity and inclusion issues, [the administration] can’t walk away from here saying they don’t know how students feel,” she said. “There’s no way you can turn around and say ‘I didn’t hear it,’ or ‘It wasn’t effectively expressed.’”

Carvajal announced he is forming a graduation selection community for the coming school year. SGA will provide a list of representatives for it by August.

Previous Column: The VSU town hall didn’t accomplish its goal
Next The curious case of VSU and the governor’s office