Home / Opinions / Column: Respect comes in the offseason for the Blazers 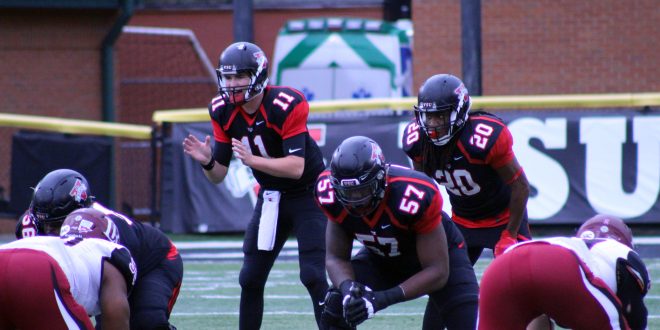 The Blazers rank No. 1 in the Gulf South Conference preseason poll.

Column: Respect comes in the offseason for the Blazers

It took a perfect 14-0 season, a couple shattered records and a frenzied national title victory for the VSU Blazers to garner respect.

Well, it comes with the territory.

The Gulf South Conference football coaches recently unanimously selected the Blazers as the conference favorite in the 2019 preseason poll.

The defending champs will return a full arsenal offensive weapons from a formidable 2018 squad.

Last season, the Blazers set GSC records for offensive yards and points in a season, single handedly crowning themselves as greatest offense the league has ever seen.

Starting quarterback Rogan Wells will be back.

He was the GSC Offensive Player of the Year in 2018 and the Harlon Hill Trophy runner-up.

The two-headed running back duo of Jamar Thompkins and Seth McGill will take some pressure off of Wells.

And there’s do-it-all wild card Ivory Durham, who is every coach’s dream, offensively.

Unless we have coach Goff take a lie detector test, I’m sure his dream was to someday comeback and coach at his alma mater.

Mozone was a mainstay of the Blazers front, totaling 25 tackles and three sacks from the interior.

Gaskin, who earned the freshman GSC Defensive Player of the Year honor, will remain as a tackle machine at linebacker.

The roster is stacked. The coaching staff is filled.

But this off season was much deeper than that. It gave their opponents time to reflect on just how  serious the Blazers are.