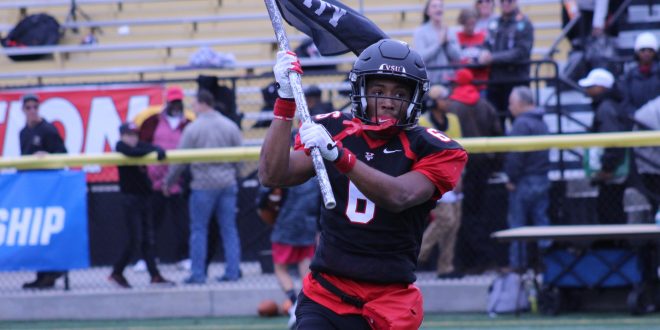 Valdosta State Football holds the title of Kings of Division II after winning the fourth title in program history. To keep that crown, they must repeat. Through the first five weeks of 2019, they may have a shot.

No one ever said it was an issue to look into the future.

Here, I decided to do as such and give my predictions for the first five weeks of the 2019-2020 season for the VSU Blazers football team.

Where are my manners? I meant to say, the defending champions.

This game, much like last season’s, could have the same recurring events.

The two opened their season with the Blazers coasting to a 45-14 victory over the Golden Rams. A weak spot for the Rams is their passing defense, which allowed 32 touchdowns through the air last season.

The Blazers smell blood, as their high octane offense — led by Rogan Wells and a bevy of targets — will get the job done on Sept. 7.

The sweet sounds of a frantic Bazemore-Hyder Stadium crowd.

It is the first home game for the Blazers as they face an unfamiliar foe. There’s not much history between the Blazers and Panthers.

But, it should be noted that the Panthers are no slouch. With two good receivers in David Turner and Cory Contini, who amassed 1,683 yards combined last season, a steady Blazers secondary is needed.

I expect a nail biting win for the Blazers.

The Blazers were actually expected to lose this game last season, as the Tigers ranked No. 8 in Division II. VSU ranked No. 16.

It was the biggest upset of the year at the time, with VSU winning 58-24 on the road.

The Division II world was on notice. The Tigers return much of their roster, especially on their defense.

UWA was tops in rushing defense last season, allowing 110 yards a game, just above 134 at VSU.

In the trenches is where this game will be won, as I unapologetically predict a 200-yard rushing game for running back Jamar Thompkins. Throw in three passing touchdowns for Wells, as well.

Words can truly not explain how sorry I feel for this take, but alas.

The Hawks have not won a game since 2015, beating a depleted Mississippi College team 42-23.

To put things in more perspective, the Hawks have lost an abysmal 33 consecutive games. The Blazers have outscored Shorter 158-0.

Okay, now the bandage is off. The Hawks have been the laughing stock of the Gulf South Conference for quite some time.

I won’t go further: The Blazers win on the road. I think the Hawks can get a field goal, though.

It may not have seemed like it then, but the Choctaws matched fireworks with the Blazers last season.

VSU won 63-42 on the road, giving up the second-most points of their season (Ferris State scored 47 in national title game).

I think the Choctaws will come out swinging with two back-to-back scoring drives, not allowing the Blazers to get off anything. VSU will then pick up the pace going into the half to tie the game at somewhere in the ballpark of 24-24.

VSU head coach Gary Goff, after a halftime talk in the locker room, will use some offensive brilliance to pull away in the second half. This one should be close, so hold onto your seats.