Home / Top Headlines / Editorial: VSU’s parking model is even worse than before 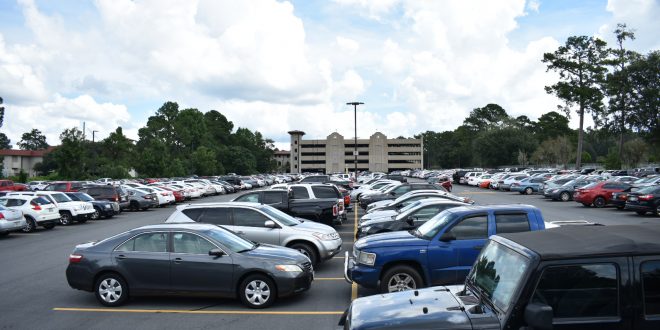 Editorial: VSU’s parking model is even worse than before

The new parking model for the North Oak parking deck that forces commuters and residents to share a garage did nothing but prove that the VSU administration and SGA are tone deaf about “student satisfaction.”

The current parking model has been a source of contention for years. Most students complain about the long walking distances to class in the hot sun, the lack of parking spaces by classes, the crowded and slow shuttles, and the parking tickets that the meter maids hand out like candy for the slightest infractions.

To ‘alleviate’ this issue, an amendment was announced a couple of weeks prior to the fall semester.

The North Oak parking deck designated for commuters will now share levels 2-5 with residential students. The resident can even park overnight. (Previously, the garage only housed commuters.)

Now another complaint: the parking deck has now become overcrowded at peak times, and commuter students are the ones being shut out. Residents live on campus and are only minutes away from the deck. Parking overnight also always guarantees fewer spots.

Commuters live away from campus, and it can take them a lot to get to school. They must plan to wake up and get ready at a certain time, and they must deal with possible traffic. They do not have the luxury of being near campus. Now they’re being driven out of their own spot.

How the administration addressed these concerns was even worse. In a rather condescending email, the Vice President of Student Affairs Vincent Miller explained that commuter students have ‘many’ parking options. He even gave a supposedly genius solution no one has thought about.

“Sustella Parking Deck has remained at least ½ empty during all times of day. It takes approximately 20 minutes or less to park at Sustella, catch the bus, and ride to all bus stops on main campus. You may consider starting first at Sustella Parking Deck during peak class times and riding the bus to the stop nearest your classroom building.” Miller wrote in the VSU email.

There’s a lot to unpack here. For someone who in charge of student affairs, he is seriously out of touch about how this is affecting his students.

This doesn’t improve the parking situation at all. This is just a slight fix for residential students, and even then, they still must walk the long distance to and from class. They will probably still have to catch that shuttle he told commuters to use to get back to their spots. Nothing got fixed. The role only reversed.

Worst of all, commuter students shouldn’t have to pay over $50 for a parking decal just to take the bus. They might as well get a bus pass.

The parking model is such a hot issue that it has been a priority for SGA President Jacob Bell for several meetings. It was one of his campaign promises to fix a model that he himself said was ‘flawed.” His promise was to listen to let students know their ‘voices are valued,’ work with the administration and make changes to benefit all students.

This is the best solution SGA and the administration came up with. Let that sink in.

Whichever reason it was, this ‘amendment’ was poorly thought out at best. Miller announced in his email that there will be announcements for more parking amendments soon, but at this rate, he and Bell need to go back to the drawing board.

Previous Five takeaways from Blazers’ first 2019 showing
Next National Chicken Month: Who has the best chicken?