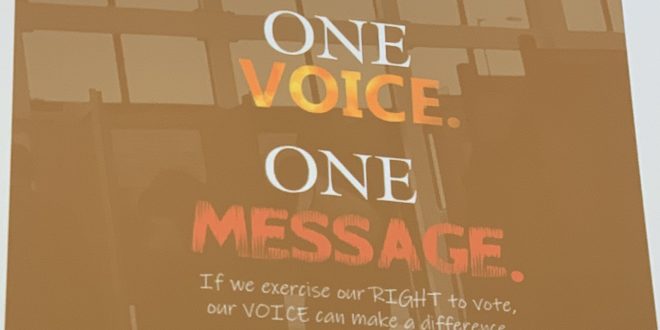 ‘One Voice, One Message’ draws attention to new polling location

A new polling location at the University Center makes it easier than ever before for student’s voices to be heard, but a recent meeting hosted by the Caribbean Student Association revealed that many students are unaware of the new polling place’s existence.

The CaribSA held “One Voice, One Message,” an informational session for voters, on Sept. 6 in the Student Union Ballrooms to offer VSU students a chance to make an impact in Lowndes County.

CaribSA president Mirakal Jackson organized the event with the help of VSU alumni Kathryn Grant and others, who provided resources including informational pamphlets that explained the importance of voting and how to get started.

“I’m very active on campus and I’ve always been passionate about student voice since I was a freshman, but never knew the ways to go about it, so she provided the resources to help me do that,” Jackson said. “Students’ voices should be heard.”

After the American Civil Liberties Union of Georgia requested the VSU campus polling station be reopened after closing in 2009, the Lowndes County Board of Elections opened the new polling location in the University center.

Senior criminal justice major Erika Chukwura is a political advocate who attended the event to help inform others of their power as citizens.

“As soon as I turned 18, I registered to vote. I knew I wanted to be the change,” said Chukwura. “We all have the right to vote and when the opportunity is given we should take it.”

However, with only one email invite sent out notifying the campus and the event never being posted to the television screens mounted throughout the Student Union, “One Voice. One Message.” had less of a turnout than anticipatedn and Jackson hopes that the next event will have a higher attendance.

“It wasn’t as successful as I was hoping it was going to be, but that’s the challenge of getting students to vote.” said Jackson.

Grant, however, claimed that the school was at fault for not notifying students enough.

“With the installation of the polling location at the University Center, it was really important that students knew there was a polling station now on campus which frankly seemed to not be that well-known,” said Grant. “VSU has an obligation that students are engaged in the voting process. That is the role of a public institution and I think they could do a better job.”