Home / Campus Life / Look at the Stars and Back in Time 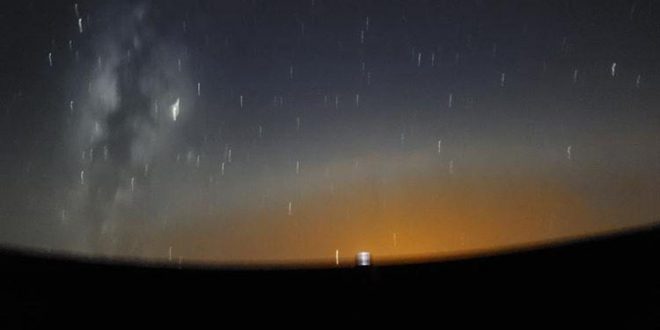 The VSU Planetarium opened it;s doors to the Valdosta community.

Look at the Stars and Back in Time

Students can not only reach for the stars on campus—they can see them.

On Thursday, the Society of Astronomy Students hosted its annual “Dawn of the Space Age” event. Students and non-students of all ages, five and up, were in line to see the October night sky and learn about the Space Race between the United States and the Soviet Union in 1957.

The event blasted off with a star-filled night sky above. Dr. Leake, a professor of astronomy and physics, pointed out the noticeable constellations, such as the Big Dipper, Scorpius and many more. Visitors also had the chance to see a glimpse of Jupiter as it sat under the moon.

As Dr. Leake went on, she explained what was above in further depth, from zodiac constellations to the North Star and Antares, a bright star that is a part of the Scorpius constellation.

As an exploration of the night sky fizzled, a history lesson about the iconic Space Race ensued.

A 3-D animation projected on the dome-shaped screen above. The audience received history lessons on the race’s birth, the trials and errors that both the United States and the Soviet Union faced and how the race has affected the world that we live in today.

With all of the Soviet Union’s overall success, it was time for the United States to also gain a win, and they did. The United States was the first to land on the moon, thus “winning” the race.

Following the history clip, the audience climbed onto the Nevins Hall roof for the night’s final moment. With knowledge of our vast sky’s history still fresh in their minds, attendees gazed at the luminous moon and stars above with, perhaps, more clarity than before.