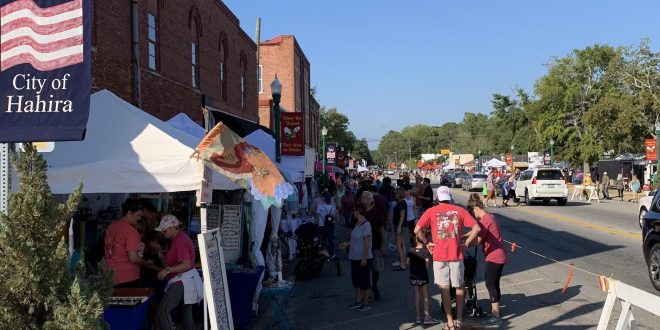 The Honeybee Festival happens every year in the little neighboring town of Hahira. The festival boasts travelling shops, food trucks and activities for guests to enjoy, never failing to attract a large number of people from all around South Georgia.

The beautiful little town, with Main Street decorated with tents, bright signs and smiling faces, dedicates the first full week of October solely to celebrating the historical symbol of the honeybee.

According to Miss Kate Tours website, “The Honey Bee Festival pays tribute to years gone by when Hahira was considered the “Queen Bee Capital of the World” for its production of honey bees.”

The festival and accompanying parade celebrates not only the historical aspect of the honeybee, but the citizens of the small town and their neighbors who relied on the insect for agriculture.

The town of Hahira is still very much a farming community, and even though the parades are themed, showing appreciation for the honeybee remains the festival’s founding principle.

The theme for this year’s parade was “Near and Far… Teachers”, which accentuated the importance of teachers, professors and educators alike, and show appreciation for them in the community and elsewhere.

Throughout the many festivities, teachers were offered special discounts on clothes, food, and other products that were up for grabs.

Local stores and boutiques gathering more business and surrounding vendors coming to sell their food to customers keeps the town a hub of commerce, if only for a few days.

There was also a free live concert meant to honor the teachers of the year from Hahira Middle and Elementary School.

The sense of community that this one local parade brings to Hahira and the surrounding area is what keeps the Honeybee Festival alive and well.

This festival is not only historically important, but important to the many people who love going every single year.