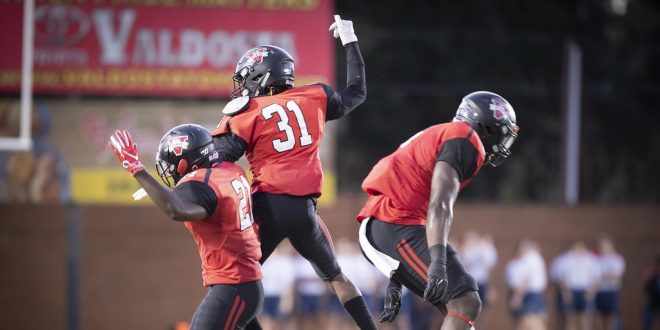 The Blazers are riding a 21-game win streak, a continuing program record.

Florida Tech is coming to town for Blazer homecoming football.

The top ranked VSU Blazers are rolling to start the season, going 6-0 and dominating each game from kick-off. The Blazers have a margin of victory of over 27 points per game.

It’s been a complete effort for VSU, as the team ranks in the top 20 in both offense and defense. They’re led by star players on both sides of the ball, including quarterback Rogan Wells and defensive lineman Thomas Incoom. They’ve done a great job of handling expectations as the defending national champions.

VSU will be the heavy favorite, and will need to take advantage of mismatches in the game. Florida Tech brings a heavy passing style, and here are the three keys to slowing down Florida Tech and getting the homecoming victory.

The ground attack is led by running back Jamar Thompkins, who has 615 yards and ten touchdowns on the season. The GSC Freshman Offensive Player of the Year is poised to blow away his total of 1,329 yards last season.

He’s joined in the backfield by Seth McGill and mobile quarterbacks Rogan Wells and Ivory Durham. They’ll look to take advantage of the second worst rush defense in the conference.

Florida Tech has given up over 200 rushing yards a game and 4.5 yards per carry. The rush defense has been their biggest weakness this season, and the Blazers should be able to take advantage.

Florida Tech has two of the top ten receivers in the conference, with Miles Kelly and Brian Spurgeon.

Kelly leads the conference in yards, with 447 yards on the season. He’s been dominant this season, averaging over 22 yards a catch so far on the year, he’ll look to keep it going against the second best pass defense in the country.

The Blazers have only given up 775 yards through the air on the season, and have one of the best secondaries in the country, led by Alex Brown and Cory Roberts. VSU has all four players in their starting secondary in the top 15 in pass breakups on the season.

It creates an interesting clash and styles, and slowing down the two game changers for Florida Tech will be the key to a VSU victory.

Rogan Wells was the Harlon Hill trophy runner-up last season, and set the record for most touchdowns in a national championship game. He’s picked up right where he left off, with 1613 total yards and 15 touchdowns to only one interception.

He’s one of the best quarterbacks in the country, and he’ll face one of the top cornerbacks in the GSC. Tyrone Cromwell is second in the conference with nine pass breakups and two interceptions on the season, leading the way for a solid Panthers pass defense.

It’ll be interesting to see how the VSU offense attacks early in the game. Will they challenge Cromwell? Or will they avoid his side, eliminating half of the field in the passing game?

If the Blazers can find success against Cromwell, they’ll be sure to put up big numbers on offense again.