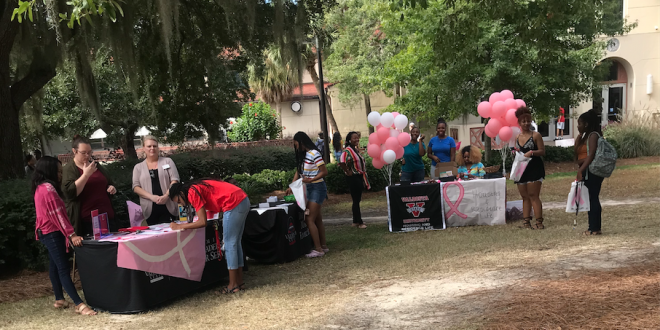 Students gathered on the Palms Quad to learn more about breast cancer.

With Breast Cancer Awareness Month coming to an end, the Department of Diversity and Inclusion decided to host a “Pink Out Party” on Oct. 28 to support not only victims of breast cancer, but to also spread awareness of Disability Employment Awareness Month.

A lot of people don’t know about Disability Employment Awareness Month which occurs every October. Its purpose is to spread awareness about disability employment issues and to celebrate all disabled employers in the U.S.

Sandra Y.G Jones, director of Diversity and Inclusion said that her department wanted to combine all the events surrounding disability awareness to create a wider-scope event that would impact the campus in a bigger way.

Jones said that breast cancer is also considered a disability, which is why the name of the event is the Pink Out Party. She hopes that her event will bring awareness about disabilities and encourage those students with disabilities to seek help at the many offices located around VSU.

“Just bringing people together to let everyone know about the different areas and how they are impacted by disability as well as just letting students know about what’s going on with this issue so that they can be more aware,” she said. “a lot of our students have been impacted and I think sometimes they just appreciate the acknowledgement.

Dr.Sonja Wright-Smith, director of the Access Office, said that 10 percent of VSU’s population has a disability and it’s important that those students are aware of the benefits that are not only at the Access Office, but at other offices on campus.

“Right now we may be working with at least 300 or so students that are registered with our office,” she said. “The reason we partner with Diversity and Inclusion is because we want to make sure that disability services are an included part of the population for our students on campus because we have several students that are registered in our office and so we serve students with disabilities.”

“I just think that when organizations try to do stuff by themselves it’s just a little harder to gather people,” Collier said. “What VSU is about is inclusion and working with who you have around you to let students be as great as they can in all areas.”

A number of students have had           personal experiences with disabilities  and breast cancer. Nia Luke, a sophomore biology major and fundraiser chair for   Distinguished Women of     Excellence, said that’s one of the reasons her organization  decided to participate in this year’s Pink Out Party.

“I have family members that have suffered from breast cancer, and I just feel like it’s important for people to be aware about the issue,” Luke said. “Distinguished Women of Excellence already had an idea for the bra pong game and so we just thought it would be a nice addition to this event to create a game out here.”

Daryl Lowe, assistant vice president and dean of students, made an appearance at the event and said that he’s happy to support the event as it has a positive impact on the VSU campus.

“This is a wonderful event. We promote breast cancer that affects so many college-aged women on our campus and around the country,” he said.

“We have invited seven different school systems to actually bring their students with disabilities to come see the services we offer here at Valdosta state,” she said.

Disability Awareness Month may be over, but the Access Office will not stop trying to spread awareness about issues surrounding disabilities and the many benefits available at their office.

This is a sponsored letter from VoteAmerica – a nonpartisan nonprofit dedicated to increasing student ...