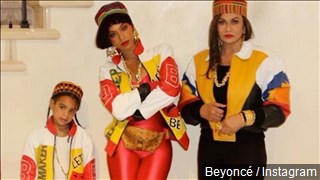 Did this iconic costume make the cut?

It’s finally Halloween time, folks! From the horror movie marathons to the trips to haunted houses, Halloween is a favorite holiday of many people. However, you cannot forget one of the most important parts of the Halloween season: the costumes! So today, we are going to break down some of the most iconic Halloween costumes showcased by celebrities.

Let’s get into it.

(1) Beyoncé as Lil Kim– While this isn’t especially one costume, I can’t shout out one look without showing the rest of them. I’ve never been a Lil Kim fan in the slightest, but her impact on fashion in the hip hop industry is undeniable. Beyoncé recreated Kim’s most iconic looks down to the T, from the clothes to the poses.

(2) Jonathan Cheban and Kim Kardashian as Sonny and Cher- Say what you want about Kim, but her Halloween costumes are ALWAYS on point, and this one is no different. Both celebrities did a great job recreating the iconic look, and I cannot wait to see what Mrs. Kardashian-West decides to do this year.

(3) Rihanna as a Chola Zombie– Rihanna’s spin on the classic Zombie costume, will never not be iconic. This costume was so different and original, and the execution was beautiful from the makeup to the clothing choice.

(4) Ariana Grande and Mac Miller as Mugatu and Katinka from Zoolander– One of my favorite duos ever, Ariana and Mac look fabulous with this costume, dressing up as the villains from the 2001 movie Zoolander. They had so much chemistry together, and it shines with this costume. Rest in peace, Mac.

(5) Katy Perry as a Flamin’ Hot Cheeto– This may be a little tame for a Katy Perry outfit, but this is very iconic. It’s so simple yet very innovative and creative. I will forever love how funny this costume is to me.

(6) Heidi Klum as Michael Jackson in “Thriller”- Heidi Klum is another celebrity who is fantastic at showcasing crazy and creative costumes. This outfit is so similar to the original, so it’s hard not to give props to Heidi for such an outstanding costume.

(8) Kylie Jenner as Christina Aguilera in” Dirrty”– As one of the most influential fashion icons of our generation, Kylie Jenner has to show us what she can bring to the table when it comes to giving us outfits that are memorable and iconic. Sure enough, she delivered with her spin on the classic outfit from Christina’s music video for” Dirrty”. I think the costume is spot-on, as the hair and ensemble look uncannily like what Christina was wearing in the video.

(7) Demi Lovato as Selena Quintanilla– Many celebrities have recreated the late Selena Quintanilla’s iconic looks. However, my personal favorite must be Demi Lovato’s take on one of her most recognizable outfits. Demi fits into the costume so well, and despite not being too fond of her in general, I have to give credit where it is due here. It’s is one of my favorite things that Demi Lovato has ever done.

(9) Bruce Willis and his pal as the Grady twins from The Shining– This may be a weird choice to some people, and I get why. Two older men dressing up as the creepy little girls from one of the most recognized horror films ever must be a bit unsettling. However, this costume will forever make me laugh. It is honestly brave of them to walk out of the house like that, so they gain my respect and admiration.

(10) Lebron James as Pennywise from It– Last, but not least, we have Lebron James dressed up as everyone’s worst nightmare. It is scary how well put together this outfit is. I applaud James for this fantastic costume, and he looks sinister as the most infamous clown in history.