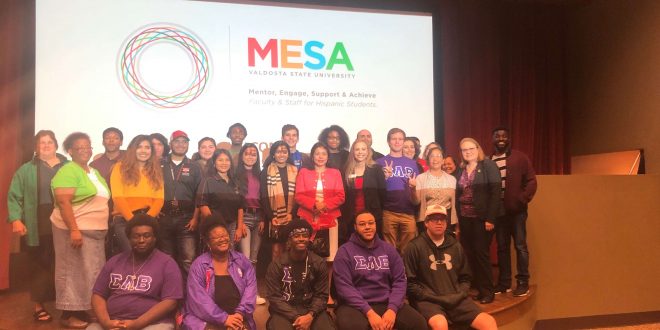 Brenda Lopez Romero, the first Latina lawmaker in the Georgia Legislature, knows what it takes to stay driven and keep up your reputation while in school.

In 2016, Romero became the first Latina elected to the Georgia General Assembly and now represents House District 99 in Gwinnett County.  Her focus is on education, retirement, state planning and community affairs committees.

VSU’s MESA and ACS organizations held an educational opportunities and success event with Romero as a guest speaker on Nov.8 in the Student Union theatre.

As the only bilingual person in her community, Romero served as an interpreter for family, friends and teachers at the age of seven.

“I do remember since I was young, I didn’t like to be told what to do,” said Romero. “I especially did not like things not being right in whatever my understanding of right was at 10 years of age. Sometimes I thought things were not right, people weren’t treated right and that always bothered me. The only thing I knew as a seven-year-old kid was how to speak English. That was what gave me privilege that other adults did not have. It became a responsibility to translate.”

Romero said her sense of responsibility became a duty to help others. This path led her into dealing with legal work where she focused on international law, national security and comparative politics. Romero graduated with a bachelor’s degree in political science and sociology and graduated law school shortly after.

Romero reassured VSU students and said she has changed her mind about what path she wanted to take while in school, and have known others to do the same. At first, her only goal was to become an attorney.

Romero was asked about the financial hardships that many students face and how to successfully balance both school and work.