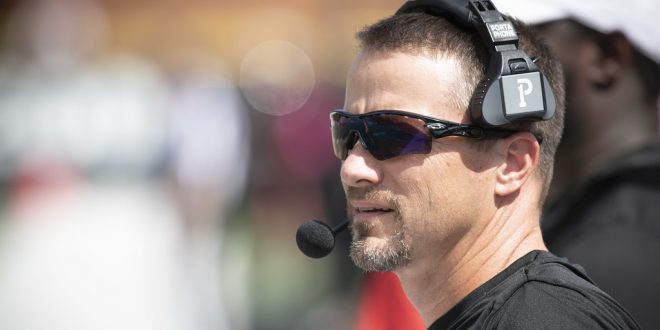 When Gary Goff arrived at VSU, the expectations seemed insurmountable. But he still found a way to achieve those expectations, and that is why the Gulf South Conference Coach of the Year award he received is well warranted.

The Blazers football team was coming off of an undefeated, national championship season. With a lot of returning talent, 2018 head coach Kerwin Bell moved on to the University of South Florida. Goff came in and the Blazers were not supposed to skip a beat, and he did just that.

“To me, that’s not an individual award at all,” Goff said. “It was nice to get the award but we celebrated it as a team and with the coaching staff. Credit to all of them to share that.”

VSU enters the NCAA tournament as the top seeded team, after another undefeated regular season. The Blazers have now won 25 games in a row.

While VSU hasn’t played at quite the same record setting pace as last season, Goff has made the Blazers one of the most complete teams in the country.

“From day one we weren’t going to let the stress or the outside noise to get to use,” Goff said. “We just wanted to approach every day as a new week and focus on this year rather than year’s past. We’ve kind of ignored everyone outside the locker room. It’s worked out pretty well.”

Goff has brought a new approach towards accountability into the staff this season. When he arrived on campus, Goff wanted to implement a disciplined attitude to the Blazers offense. Throughout the offseason, you’d hear the word discipline from him and the VSU players.

The Blazers are on pace to finish 2019 with less penalties, less sacks allowed and less fumbles lost than their historic 2018 season. But the biggest turnaround is the defensive numbers at VSU.

“The guys have really trusted one another and bought into the scheme that we are running. Those guys have played really well all year long and they are working on getting better every single day.”

The Blazers are no. 24 in the country in total defense, bringing down their opponent’s average yards per game nearly 50 yards per game from 2018. This turnaround has made up for the slight step back in offense, as it was unrealistic to expect the Blazers to maintain their 52 points per game average from last season.

With all of that, Goff still sees opportunities for the Blazers to continue to improve in the playoffs.

“We’ve spent a lot of this week working on our fundamentals as a team, just sticking with the basics,” Goff said. “There’s no such thing as a perfect football game, but as a team that’s something you always want to chase. So we can continue working on shoring up the little things to reach it.”

VSU’s next game is on Nov. 30 in a rematch against West Florida. They were able to knock off the Argonauts 26-21 just two weeks ago.

“We’re always just focused on ourselves and going 1-0 every week, it’ll be a good game and we always look forward to the challenge,” Goff said.

Previous People Poll: What are you wearing this fall?
Next Familiar faces could cross paths in Blazers playoff run