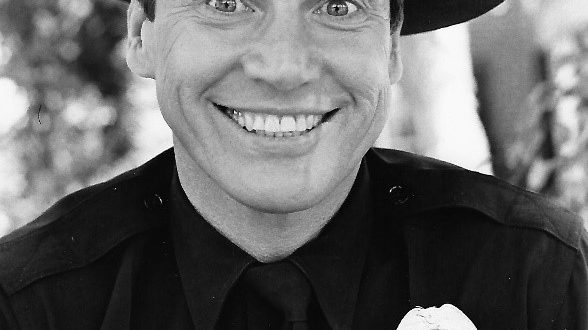 Shroyer dressed as Sheriff Enos from the hit television show "Dukes of Hazzard" .

While there is a seemingly endless list of people that have contributed to the success of the City of Valdosta, there are only a handful of people that come from Valdosta, that have reached a level of fame that is at least noteworthy. One of these notable people is Valdosta native, Otis Burt “Sonny” Shroyer Jr.

Sonny Shroyer was born on August 28th, 1935 of Valdosta, Georgia. He got familiar with the world of art at an early age. Some of his earliest memories consist his mother taking him to a nearby friend of theirs’, Mrs. Wilcox, for piano lessons. The piano lessons lasted a little over a year. Mr. Shroyer also participated in activities such as poetry/elocution lessons and ballet.

“I would be with Mrs. Wilcox working on poetry and my elocution lessons right across from the old kindergarten where my other friends my age would be playing”, responded Shroyer when asked about his childhood.

Sonny also recalls that when he was 8 years old, he took ballet lessons with his ballet teacher Mrs. Yeomans.

When asked what he thought of learning so many different skills at such a young age he responded, “At the time I would wonder why my ma would have me doing all of this, but overtime I noticed that the skills I learned when I was younger actually helped me in my later pursuits in life like football and acting”.

Some of his favorite childhood activities were playing marbles in kindergarten, hunting squirrels and birds in his free time. Another early memory Sonny had thought of was when his father first let him join in on the family fruit stand business when he was as young as five years old.

Apart from working in his father’s fruit stand, he also had other jobs in his later adolescents. It was around this time that Sonny’s dad had a farm in Adel, Georgia which was about 30 minutes away from their home.

“I would mainly work with the tobacco sticks that were on the farm. My cousin Billy and I would have to hand tie the tobacco to the sticks and we would get them all in line”, says Shroyer when he was asked about the farm.

Football was also a very prominent activity in Sonny’s life, as well and it showed in his skills on the field. By the time he reached high school, he had worked hard enough to secure a spot on the varsity team. He played on the Lowndes County Football team as the position of right tackle as a six-foot-one freshman. His effectiveness on the field in high-school did not go unrewarded as his skills went on to land him a football scholarship at Florida State University. Unfortunately, his football career was forced to come to an end as he attained a shoulder injury during his time at Florida State.

However, Sonny did not let this hinder his pursuit of a college education. With this riveting determination, he graduated from the University of Georgia with a degree in business.

“There were many, many distractions throughout my time in college. Whether it was parties or the boring material in school. I got it done though”, Shroyer said about his time in college.

Mr. Shroyer went on to say that it took him five years to graduate as well as having to go through summer classes. In college, he also met his future wife, Paula Shroyer, with whom he had two sons Marcus and Christopher.

After graduation from the University of Georgia, life was pretty calm for Sonny Shroyer. Around this time in his life he had moved to Atlanta, Georgia and was living with his roommates’ Frank and Faith Garner. During this time, his main source of income came from his job at a Ford Company in Atlanta and from selling boiled peanuts. Frank did photography and eventually asked Sonny to take a picture while holding a Coca-Cola bottle and wearing a football uniform.

“Yeah, just out of the blue Frank asked me if I could take a picture for a potential advertisement that was gonna be called ‘The Halftime Strategy’. Basically, the run down was that I’d be wearing a football uniform and holding a coke bottle while Frank took the picture”, said Shroyer about his first experience with commercial photography and advertising.

The picture that Frank took of Sonny for the Coca-Cola advertisement would be seen on the back of University of Georgia magazines. This was also the subtle and unexpected beginning of Sonny Shroyer in the show business.

After the Coca-Cola advertisement picture Sonny took on some other small modeling gigs. Frank later introduced Sonny to a guy named Clyde May. Clyde insisted that Sonny get an agent for modeling while he was also still working at the Ford Dealership.

Overtime Sonny got more and more jobs and modeling opportunities as well as more commercial advertisements. Eventually all of his accolades would land him his first acting parts in the two movies “Like a Crow on a June Bug” with Mercedes McCambridge and “Payday” with Rip Torn. He landed both roles in the year of 1972.

Shroyer hilariously recalls one of his first one on one conversations with fellow actor Rip Torn who just recently passed away on July 9th 2019.

“I remember one time in between takes on the set [of Payday] I walked up to Rip to ask him was his real name was, because I didn’t believe that Rip Torn was his real name. Rip then looked me dead in the eyes with this mean expression on his face and demeanor and said ‘Rip Torn is my real name’”.

Shroyer’s career in the show business continued steadily and with promise. He landed a notable role in “Roots” in which he played Seaman Thompson.

Another notable role Sonny Shroyer had was in the tv movie “Freedom Road” where he acted along with Muhammad Ali and Kris Kristofferson.

Sonny recalled a brief moment he had on set of “Freedom Road” with Muhammad Ali where he was nervous to ask for a picture from him not only because of Ali’s popularity, but also because the set was tense due to the racial content being portrayed in the movie.

“You’re not such a mean white man after all”, Ali said with a smile after Sonny shook his hand and asked for a picture.

It was soon after Sonny’s time working on Freedom Road that he got a call from his agent informing him that he had secured a role for a character named Enos for the show “The Dukes of Hazzard”. After the

The next six years of Sonny’s life was spent playing Enos.

When asked which was his favorite character that he’s played he stated, “Enos. Hands down my favorite”.

There were many memorable moments on the set of “The Dukes of Hazzard”. Sonny’s personal favorite being during the production of the episode titled “The Ghost of General Lee”, which aired on October 26th, 1979.

The scene was initially supposed to consist of Bo and Luke driving into a pond and then getting someone saving them. Sonny’s character, Enos, was supposed to find a way to get help. In between cuts Sonny told the director that the scene made no sense because in reality Sonny would have just jumped in and tried to save them instead of running around and trying to get help. The director briefly thought about it and then agreed. After agreeing with Sonny, the director immediately yelled ‘action’ and Sonny jumped right in the pond adding realism to the scene.

Sonny was having a blast playing Enos and around the third season of “The Dukes of Hazzard”, Sonny was approached by the lead director of the show and was asked if he’d like to star in his own spin-off television show titles “Enos”.

“When I first got the news, I was a paranoid and thought they were looking for a way to get me off of the show. I thought they were kidding’” replied Sonny when asked about how he felt about the television show proposal.

Apparently, the directors weren’t kidding because soon after that, Sonny was starring in his own show alongside his good friend Samuel E. Wright who played Officer Turk Adams.

“Enos” lasted one year and after that Sonny returned back to the “Dukes” cast.

Sonny now resides in his hometown of Valdosta, Georgia where he just recently received the key to the city on July 6th, 2019.

This year, voting might be as crucial as it’s ever been. But one of the ...