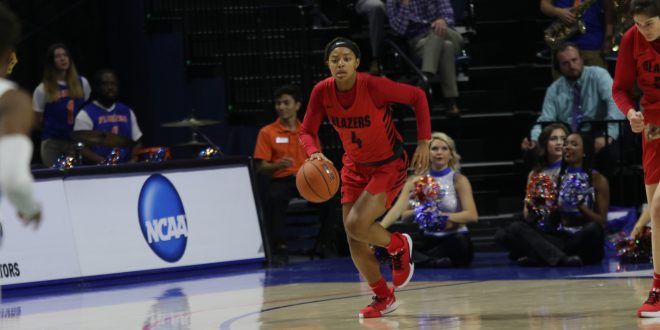 Cheray Saunders looks to get out in transition as the Lady Blazers take on the Florida Gators.

It’s been a good start for the Lady Blazers, but after a tough schedule to start the season, first year Head Coach DeandraSchirmer sees this roadtrip as an opportunity to make up some ground.

Just after the halfway point of the season, VSU sits at 12-4, but all four losses have come in Gulf South Conference play. That puts them fifth in the GSC standings, with 12 games to go.

VSU has a great opportunity to make up some ground, as 10 of their last 12 games are teams below them in the standings. It starts with two road games, at West Georgia on Thursday, who is eighth in the standings, followed by Saturday with Shorter, who is at the bottom of the standings, 0-7 in conference play.

“We had to play one of the top teams in conference our second conference game of the season,” Schirmer said. “Then we faced Lee and Alabama Huntsville, who is tied with us in conference play. We respect all of our opponents, but we’ve got to hit our stride, because we have favorable matchups in our coming schedule that we need to take advantage of.”

There was a slight adjustment period from Schirmer and the players to get used to each other and tendencies during games, but it didn’t stop VSU from winning games early on. Now it’s all about finding the consistency.

“I found out early that (in the games we lost) if we’re not hitting our shots, we tend to lose focus on the other end of the court defensively, so finding that consistency is important to setting the tempo, said Schrimer “We want to be able to push the tempo to our liking, and score in transition, but if we’re not setting up our defense and getting stops and rebounding, then they control the tempo and will slow us down.”

That 17 points and five possessions a game correlates to the team’s ability to get out and transition and create scoring opportunities for their leading scorers, Kayla Bonilla (19.1 PPG) and Cherry Saunders (15.7 PPG).

“We are a very good transition team. The ball usually ends up in Bonilla’s hands, and she does a great job distributing the ball on the fast break. It’s all about playing our game and being the aggressor on the court.”

The biggest emphasis for consistency is defense and rebounding, which is key to the game against West Georgia. Despite their record, the Wolves are the second leading scoring team in the conference play. Their play style doesn’t have anyone inside, as they space the floor, drive to the basket and pass out to shoot as many three-point attempts as they can. They’ve attempted 48 more threes than the second ranked team.

This allows West Georgia to score a lot, but their efficiency lacks, as they only hit the three-point shot at a 27% clip on the season, the fourth worst in the conference. Schirmer wants the Lady Blazers to use that aggressiveness against them, and play for the long rebound and beat them inside.

“They make a lot of threes, but they definitely live by the three and die by the three, and it really can suit our game plan,” said Shrimer. “If we can take hold of the long rebounds, we’ll be able to push in transition, get more possessions, and score inside where they’re at their weakest.”

The Lady Blazers game against West Georgia tips off at 6 p.m. Thursday, followed by 2 p.m. Saturday at Shorter.