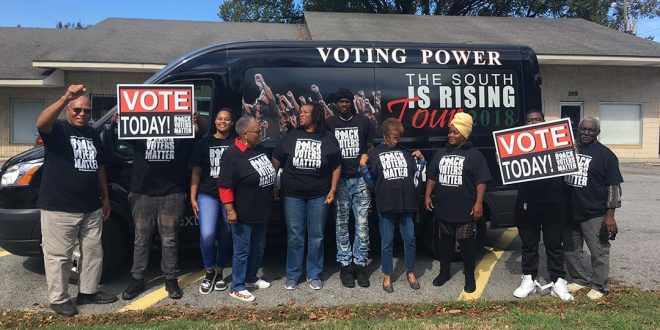 Viewers will be allowed a tour of the “Blackest” bus in America.

This year, voting might be as crucial as it’s ever been. But one of the massive issues this country has faced since the invention of dirt is actually convincing the “less-informed” to go by the polls, making their voice heard.

In the African-American community, this has been the norm. Furthermore, there’s an underlying need for engagement within the black community.

There have been hundreds of initiatives to help increase the black vote. The Black Voters Matter Fund is an organization inwhich the purpose is, “to increase power in our communities. Effective voting allows a community to determine its own destiny.”

The fund will have a Georgia bus tour from Jan. 17 to Jan. 20 in Albany, Valdosta and Camilla. Viewers will be allowed a tour of the “Blackest” bus in America.

The tour “aims to register voters, encourage people to turn out to vote in the special election for the Georgia state legislature, get less frequent voters more engaged and help organize around issues people care about,” Valerie Holford said, a communications consultant for the group.

On Jan. 19, there was a service at Kingdom Builders Fellowship Church.

Monday, Jan. 20, voter registration will move to VSU from 12-3 p.m, as the organization will attend the Dr. Martin Luther King Jr. Memorial March.

Albright says it is important to spread awareness of voting on college campuses.

“Young people have always been the engine for social change,” Albright said. “For this reason, we always try to connect with students. Particularly at schools and communities where students have organized around issues of social justice.”

Furthermore, Albright says the organization has kept a close eye on supporting VSU.

“We are familiar with some of the challenges Black students have experienced at Valdosta State and we want them to know that BVM supports them,” Albright said. “And to let them know that we need their energy in organizing throughout the community.”

Previous Weekend roadtrip offers opportunity for Lady Blazers Basketball
Next Software Updates: Out with the old, In with the new