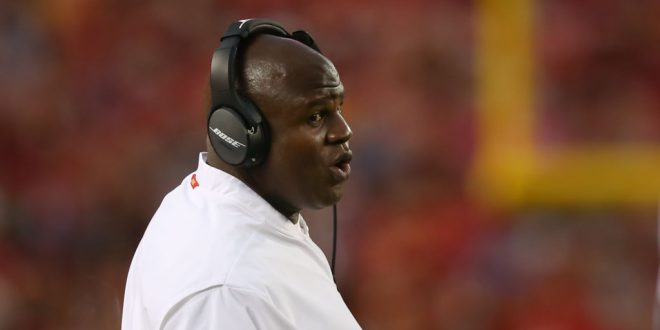 Eric Bienemy is one of two black offensive coordinators in the NFL. Bienemy was highly sought after in the last two coaching carousels, but struck out in finding a head coaching role.

I was driving back from Jacksonville a couple weeks ago, as I spent some time at the beach for my 21st birthday. Typically when I take road trips, I like to reflect.

No music, no radio.

The drive was about a shade under two hours, considering the traffic that caught up with me at the Florida-Georgia line. I talked myself into a daze, but I couldn’t just fall asleep during the drive.

So, I swallowed my car habits and reached for my radio. As I turned and seeked the perfect station, I stumbled across a sports radiocast. I couldn’t tell you the station, nor could I tell you the voice behind it all.

But I could tell you the topic: Black head coaches.

The radiocaster was vibrant and fierce about the lack of black head coaches in professional sports, especially in the National Football League. As of 2020, the NFL has three black head coaches, out of 32 franchises.

We could add Redskins head coach Ron Rivera for the sake of this story, but he is hispanic. Nonetheless, this is embarrassing, degrading and immature.

The three black coaches this year compare to the same amount as in 2003 when the Rooney Rule was introduced. This rule requires NFL teams to interview ethnic-minority candidates for head coaching and senior football operation jobs.

At the start of the 2006 season, the overall percentage of African-American coaches had jumped to 22 percent, a huge increase from six percent prior to the Rooney Rule. So you can say the rule has served its purpose.

See, with this rule, it is not a guarantee the candidate will even get a fair shake in the process. It’s a forced idea that the league has disguised to make its endorsers feel good.

Kansas City Chiefs offensive coordinator Eric Bienemy is —well, was— the highly touted candidate of color out there in the last two head coaching carousels. Two AFC championship wins, with the most recent ending with a berth in the Super Bowl 54.

In 2018, Bienemy and the Chiefs offense didn’t even take the field against the New England Patriots due to a bogus overtime system that I will discuss at a later time.

Nonetheless, Bienemy is an offensive savant in a league that loves innovation from its head coaches. I’ll put things in a bit more context if that doesn’t move your needle

The Global Sports Institute at Arizona State University recently did a study that proved that black coaches have a tougher route to that illustrious head coaching gig than whites.

Bieniemy and Tampa Bay’s Byron Leftwich are the NFL’s only black offensive coordinators at the moment.

You want know what’s even frightening? So, 14 percent of white head coaches who are fired are re-hired again by other franchises. For black head coaches, that number is at seven percent.

Alarming is the term I would use here.

My theory is that NFL front offices are skeptical. Not of the black candidates, but the lack of really good ones in the pool. I just named two, but there are defensive coordinators, special teams, etc.

Steve Wilks, former defensive coordinator last season of the Cleveland Browns, knows how this feels. He was miraculously hired as the head coach of the Arizona Cardinals in 2018.

With a mere lackluster roster, the Cardinals put together a 3-13 season in a stacked NFC West. For those non-sports fans out there, the NFC West is heavily regarded as the toughest division in the NFL.

Wilks was let go after one season. He was replaced by Kliff Kingsbury, a pretty-boy head coach of the Texas Tech Red Raiders down in College Football.

Kingsbury’s resume doesn’t jump out of my hand. He coached Chiefs star quarterback Patrick Mahomes in college, but that’s all I can give you.

Oh yeah, he had a good relationship with Kyler Murray back in his college days. The Cardinals took Murray No. 1 in the 2019 NFL Draft after winning the Heisman Trophy as the best player in college football for the University of Oklahoma.

Ah, what a coincidence.

Kingsbury advertised his style of offense, known as the Air Raid. A system predicated on flinging the football nearly a thousand times a games. If you can throw a football over a mountain, you’re the guy (or gal) to lead Kingsbury’s offense.

Depending on how tall the mountain, I could probably put my name in there as well. But Wilks was a defensive ace.

He ran a typical pro-style, smash-mouth offense. Get the ball to the running back and block. Ya know?

Very methodical, which resulted in the worst offense that season. The defense was a tad better, but nothing too sexy. But this gives me cause to pause.

Did the Cardinals really give Wilks a chance? Was he just a bridge-coach?

That will yet to be known and will likely live as just another move in the NFL machine. This happens too often though.

But I have a solution. It requires transparency, something the NFL will never — ever — give it’s fanbase.

The NFL should implement the “Transparency-Hire Rule.” Yes, I made it up and I hope you like it too.

NFL teams will interview their candidates, keeping the Rooney Rule in mind. But in this instance, after each hire the front office must release a document of why the head coach was hired over the other candidates. The document should consist of requirements or expectations the other candidates did not meet.

To help eliminate the typically cliché responses, the players of the NFL team that is hiring the head coach, must take a vote on each candidate as it is released by the front office.

Players are constantly thrusted into being coached by someone they don’t think is right for the team, so this would definitely help.

Not only black candidates, but all candidates will benefit from this clear and discreet hiring process.

Previous Crime Report: Lock up your stuff
Next Lady Blazers Knock Off Auburn Montgomery 77-51 at Hall of Fame Weekend

TectonixGEO, a data collection team, used cellular tracking to configure a map of how ignoring ...