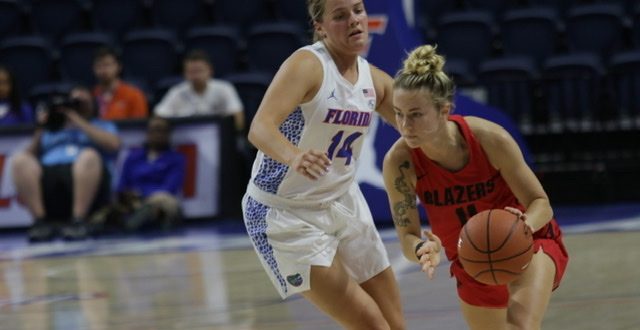 Delaney Bernard got off to a hot start for the Lady Blazers, scoring 13 points in the first quarter. She led the way as VSU knocked off Auburn Montgomery 77-51.

Fast and efficient. The Lady Blazers quick start led to a dominating performance over Auburn Montgomery, as they won 77-51.

It was a much-needed win for the Lady Blazers, as they won their second in a row after going on a three game losing streak. They now have a 14-5 record on the season.

VSU was scintillating to start the game, as they hit nine of their first thirteen shots in the first quarter, including five threes. This was due to some active hands on defense, as the Lady Blazers forced 10 turnovers in the first half, and turned that into 14 points off turnovers.

Delaney Bernard opened the scoring with a three-point shot, and she set the tempo for VSU. She had 13 points in the first quarter, and outscored Auburn Montgomery by herself. She set the tempo on offense as the defense took over on the other end.

Coach Deandra Schirmer credited the defense for the quick start on offense.

“We lost a few games, and the obvious thought was we needed to score more points,” Schirmer said. “But our defense sets the tone for our offense. We did a great job getting stops and using them to get good shots on our end.”

The defense was truly dominant, holding Auburn Montgomery to 29% shooting, and forcing 17 turnovers. Germani Abram was the enforcer inside with three blocks.

“We’re at our best as a transition team, and that’s what makes our defense essential. Setting our defense and forcing turnovers gets us going the other way, and in turn doesn’t allow their defense to set, giving us good looks.”

The second half, the Lady Blazers held Auburn Montgomery at bay, extending their lead to over 30 points at one point. Kayla Bonilla and Cheray Saunder led the team with 19 points apiece.

“We started adding some wrinkles into our offense, attacking more downhill, which Saunders did a great job of, and we ended up scoring 17 points in the paint. When we are aggressive inside we can find open shooters, and if we hit our shooters with space, I know they can knock down the shots.”

The strategy paid off, as the Lady Blazers hit 11 three-pointers, and shot nearly 45% from that range.

VSU now sits sixth in the conference standings, with a 6-5 record after their second win in a row. They’ll look to keep the streak going on the road next Saturday as they take on the University of Montevallo.