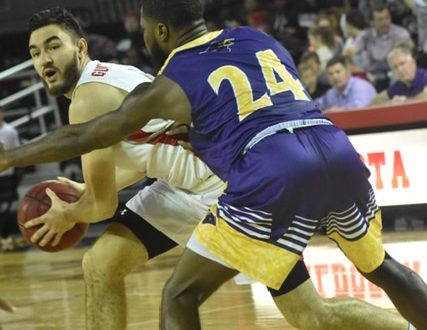 Clay Guillozet was key to the Blazers win over Montevallo. He was also recognized as GSC’s Player of the Year.

Valdosta State knew the top seed in the tournament came with expectations.

Montevallo gave it their all, but it wasn’t enough to knock off the Blazers in their final home game of the season.

After a slow start, the Blazers found themselves down 11-4 early against the Falcons, a team VSU beat by 31 two weeks earlier. After the media timeout with 15:59 remaining in the first half, VSU went on a 17-2 run in just over four minutes and never looked back. The Blazers won 96-73.

“They hit a couple of really tough shots early,” VSU Head Coach Mike Helfer said. “I didn’t want our guys to get rattled early on, so I told them that ‘they got the first punch in, now we’ve got to punch back.’ After that we kept our composure and made some plays.”

The win moves the top-seeded Blazers on to the second round of the Gulf South Conference tournament. They’ll play West Alabama at 6 p.m. Saturday in the semifinals matchup in Birmingham, Alabama.

This is also VSU’s 18th win in a row, tying the record for most consecutive wins in school history. The Blazers are now 25-3 on the season overall.

For the game, the Blazers forced 12 first-half turnovers on defense and turned it into shots at the rim. They scored 30 points in the paint in the first half and forced Montevallo into 12 fouls early. VSU was in the bonus midway through the first half.

Burke Putnam was the go-to man early, and he scored a quick seven points to pace the Blazers and was the lone bright spot early as the team struggled to hit shots. Once he was able to attack the paint, other players found space to get involved in the action.

At the start of the second half, Montevallo tried to go to a zone defense, trying to limit VSU’s ability to attack the basket. Gulf South Conference Player of the Year Clay Guillozet hit a couple of quick jump shots, and extended the lead to 20 early, at 53-33.

“They found me open,” Putnam said. “When my teammates are looking for me I just do what I can to help the team. I had struggled shooting the ball this season compared to what I’m capable of, so getting to hit some shots was big.”

After the three-pointers, the zone defense from the Falcons opened up a few holes inside, and Bryce Smith made himself at home in the paint. He had a huge second half scoring in the paint, and finished with 22 points and seven rebounds.

“I got really great players around me, and they can shoot the ball and score by themselves,” Smith said. “Once they hit a few shots it really opened the game up, and I knew my guards would find me.”

Other top players included leading scorer Putnam, who had 24 points of his own to go along with four assists and Guillozet, who had 15 points, five rebounds and six assists.

VSU continues to be one of the best teams in the country by being one of the most aggressive and versatile teams in the country. They’re currently 12th in all Division II in scoring, averaging 89.4 points per game. Tonight, they topped their season average while also shooting the ball very efficiently, at 55.6 percent for the game.

“We have so many versatile guys that are really good players,” Helfer said. “But, most importantly, they care about each other on and off the court, and that chemistry is now starting to take place on the court, because they don’t care which guy is scoring.”

The versatility includes five starters who can all have a great game on any given night. Four of the five starters ended the game scoring in double figures.

For their next game, Helfer expects a hard-fought game as the final four brings out the best of the best from the conference. The semifinals and finals games will be available on the ESPN App.

“Whoever the top seed is has the target on your back, but we know we want to wear that target,” Helfer said. “I’d always rather be the one seed than the seventh. Guys in our program know that we want to be that team facing everyone else’s best, and they aren’t afraid of the expectations.”