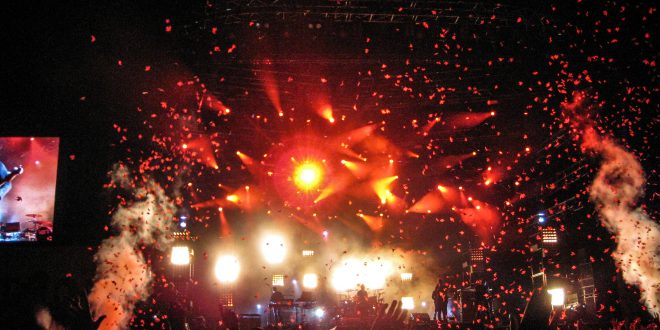 COVID-19’s Impact on the Music Industry

It’s no secret that something like a pandemic would ruin things for the entertainment business.

Among many other things that the COVID-19 pandemic has greatly affected, the music industry has taken quite the blow as well.

The global music industry collects two main income streams, the first being live music and the other being recorded music.

Live music events, as we know them, may be changed forever. The risk of COVID-19 transmissions are more likely to occur for large gatherings where people are in close contact for extended lengths of time.

This will continue to put a strain on the live music industry as more events get canceled due to the pandemic.

“The cancellation of 2020 shows is likely to cost the music industry tens of millions of dollars,” Mark Halstead, partner at financial risk and business intelligence firm Red Flag Alert, said.

“However, this lost revenue could quickly escalate and rise to hundreds of millions of dollars within weeks if more artists cancel shows and cancellations extend further into 2020.”

Coachella, Bonnaroo, Summerfest and Lollapalooza are all prime music festivals that were canceled or rescheduled to a later date, causing a big loss for the music economy.

Not only have major tours and music festivals been negatively affected, but streaming apps and physical CD and vinyl sales have experienced fluctuating impact.

According to the Midyear report from Nielsen Music/MRC Data, Spotify and Apple Music streaming platforms began the year up 20.4% from 2019, but only had an increase of 13.8% between the time period of March 13 and July 2. This difference during these months was likely due to COVID-19 stay-at-home orders.

It doesn’t come as a surprise that the sales of physical forms of music were in worse condition, given the circumstances. The pandemic caused physical album sales to decrease tremendously, finishing the first half of 2020 down 20.3%, Mikael Wood, pop music critic of Los Angeles Times, said.

On the other hand, the industry has had some help with the power that TikTok holds. TikTok has a growing relationship with songs and their success from the exposure they get on the app.

The MRC Data report also reveals that “The Box” by Roddy Rich reached nearly 1.1 billion on-demand streams, and Doja Cat came in fourth with 396 million streams from her song “Say So.” Both of these songs were huge hits on TikTok.

Often times, songs that are trending on the app are characterized as “TikTok songs” because listeners relate the song to the app instead of the actual artist.

The top music on the app ranges from new, popular music, to older songs gaining more recognition from certain trends.

During these unprecedented times, the entertainment industry will continue to experience highs and lows in different areas. Everyone remains in the unknown about how much of the future will play out, but it’s important to stay hopeful during these times.