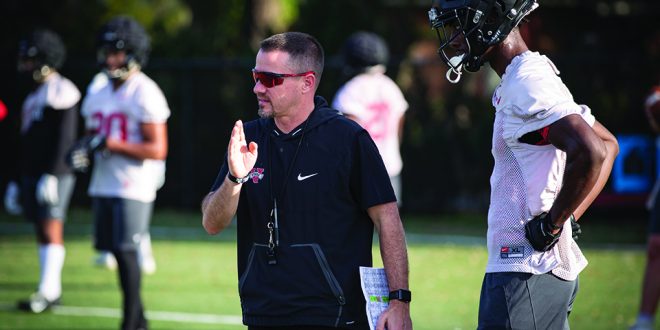 How postponement of fall sports has affected athletic fitness

With most fall sports at Valdosta State being postponed until the spring, coaches and athletes alike are having to adjust their schedules to accommodate, as well as, make changes to their normal routines due to the ongoing coronavirus pandemic.

While it is still unknown whether fall sports will be able to proceed in the spring, some coaches and players are pushing on with the potential spring season in mind. However, not every sports team at VSU is practicing at the same level of intensity as others.

“With the postponement of the women’s soccer season, some of the pressure has been taken off of staying in a routine,” said Stephen Andrews, head coach of women’s soccer at VSU.

“We are not doing as much right now as far as practice, as we are only spending about two and a half hours per week practicing,” Andrews said. “However, we are spending more time in the weight room while waiting on word from the [Gulf South] conference and administration about whether we will play in the spring.”

Regarding football, it has been a much different story.

“This fall has been pretty heavy for us,” said Taj Taylor, junior defensive back. “Workouts Monday-Friday, study hall three days a week, and field practices two days a week.”

“Eight weeks of lifting was missed, resulting in a drop in strength,” said Gary Goff, head coach of VSU football.

“The players were used to a routine schedule,” Goff said. “They want to play and they appreciate being able to get back to work. We are currently doing skill drills two hours a week in groups of eight and are hoping to have 15 days of practice and scrimmages in October.”

Both coaches are hopeful that their teams will be able to return to action in some form in the spring of 2021.