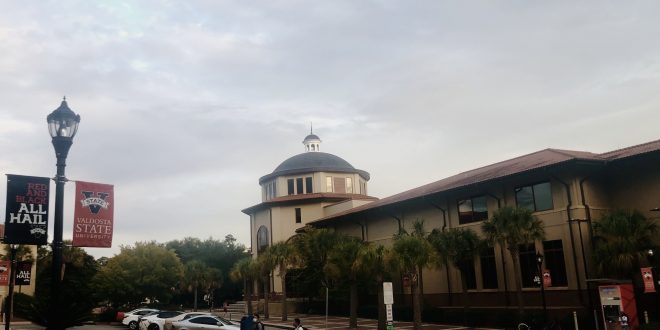 Watch your toes, VSU students, as a dirt bike rider roams free after shaking off VSU Police in a high-speed chase through Pedestrian Mall on Sept. 30.

On the night of Sept. 30 around 7:50 p.m. Officer Michael Whitlock initiated a traffic stop after hearing multiple dirt bikes riding down a nearby street.

“One of the dirt bikes drove through the pedestrian mall to try to get away and Whitlock followed until his supervisor told him to disengage,” Officer Rebecca Leatherberry,

All three dirt bikes took off at a high rate of speed. Two of the dirt bikes turned onto Sustella Avenue and one continued on Baytree Road.

Whitlock pursued after the one bike onto Baytree Road heading west bound. The subject went into the oncoming traffic lane to go around vehicles turning onto Melody Lane. The driver disregarded the red light at Baytree Road and Melody Lane as well. He then turned into the gas station and continued back east bound on Baytree Road at a high rate of speed towards North Oak Street.

The driver turned north bound onto North Oak Street then onto Hopper Circle cutting across the Pedestrian Mall walkway from the Student Union towards Carter Drive.

VSU students on the scene witnessed the incident and some were rather intrigued.

“Honestly, I thought it was a funny because I saw a dirt bike and then I saw the police, but I thought they were doing two different things,” said Icarli Felder, a junior majoring in secondary education. “I thought the police wouldn’t follow him, but they drove straight through here.”

Whitlock resumed to normal operations after his supervisor called off the chase.

“Pursuits are often terminated when it becomes too dangerous (i.e. the potential of hitting a pedestrian on campus) and there is no apparent felonious reason why the driver is evading arrest, which is what happened in this case,” Leatherberry said.

Previous Editorial: In-person commencement the right decision
Next People Poll: How do you feel about fall 2020 commencement now being in person?