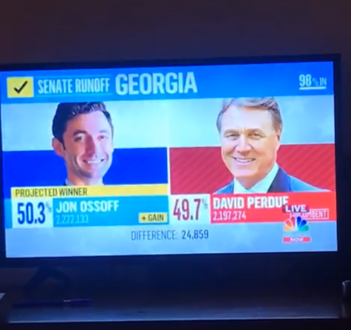 The Georgia runoffs for the Senate have officially closed, and the Democratic party reigns victorious.

Apart from history being made for both Warnock and Ossoff, their wins spell out massive implications for the United States government. This not only gives the Democrat Party control of the Senate, but also solidifies the democrat trifecta, with the party controlling the Presidency, the House of Representatives and now the Senate.

“One of the first things that I want to do…is to deliver the $2,000 checks to the American families,” he said.

This, of course is in reference to the proposed COVID-19 aid that has been a hot topic of discussion in the chambers of Congress over the last few weeks.

Stimulus checks of $600 were included in the first coronavirus stimulus bill, but President Trump threatened to veto it, citing unnecessary foreign aid and other spending that he deemed wasteful. The President sent the bill back to Congress, demanding that the checks be increased to $2,000 and that the wasteful spending be removed.

The $2,000 checks cleared the House, but against the President’s wishes, the proposed checks did not make it through the Senate, as Majority Leader Mitch McConnell blocked them.

This was most likely a costly mistake for the Republican Party, as the checks were not only demanded by the President, but also had a considerable amount of support from the base of the GOP. The Senate GOP’s block of the COVID-19 relief checks most likely also affected Republican turnout in the Georgia runoffs, as pollsters have indicated that the base stayed home.

With Democrats controlling both chambers of Congress in addition to having Joe Biden as president, the stage is set for the Democratic Party to carry out their agenda with virtually no roadblocks.

Previous Column: Five defining moments in 2020 Politics
Next Editorial: The importance of Democracy in American Institutions