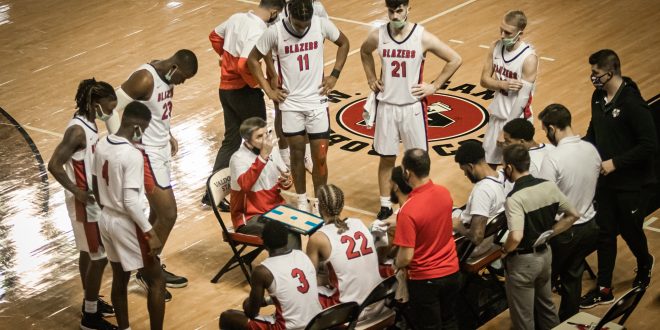 The season began on Dec. 12 with an away game at West Georgia, and the Blazers remained without a loss through Jan. 12 when they defeated West Florida.

According to Head Coach Mike Helfer, getting ready for the season this year has looked a little different in comparison to others.

“It was different in the manner that we didn’t get to prepare a lot because of COVID and the shutdowns and the contact tracing,” Helfer said. “That’s probably what was different.”

The Blaz­­ers had a similarly impressive start to the 2019-20 season, so Helfer does not find this season’s undefeated start very surprising.

“We’ve had some success early and the credit for that goes to our returning players that have been able to kind of teach with me,” he said. “It has kind of sped up our learning curve…my returning guys have done a fantastic job of helping our new guys learn our system.”

Cam Hamilton, a junior redshirt, is one of the players responsible for the Blazer’s excellent start.

On Jan. 12 when the Blazers played West Florida at home, Hamilton had a career-best performance.

Hamilton scored a total of 29 points and went 8-11 with three-pointers as the Blazers defeated West Florida 95-83.

The Blazers went 26-4 last season, and while Hamilton is confident his team is capable of improving on that record this time around, he’s only looking as far ahead as their next game.

This appears to be the mentality for the entire team, including Coach Helfer.

“We’re not shying away from saying that we want to have a championship type of season, but I don’t want to compare one team to another team [from a previous season],” Helfer said. “Even though I have some kids from last year, this is a new group. Let’s see what we can do this year.”

On the court, Hamilton is arguably playing at his best right now. According to Helfer, Hamilton has been a vital member of the team since last season.

“Cam was a critical player last year, but we lost some players [this season] and I think he’s kind of stepped into a new role that is more of a leadership role,” Helfer said. “I see cam kind of growing in his leadership role, and I think that’s helped his confidence to do what he’s doing on the court.”

Apart from himself, Hamilton believes all of his teammates have the ability to produce a standout performance in any given game.

“We’re so deep; we have so many pieces,” Hamilton said. “On any given night, somebody could come out and just kill, so we just make sure everybody’s ready, especially with [the risk of contracting] COVID.”

The Blazers suffered their first two losses of the season to Lee on Jan. 15 and 16.

Their next game will be at Shorter on Jan. 22.

Previous Lady Blazers basketball starts the season off strong
Next Tips: How to avoid student burnout this semester