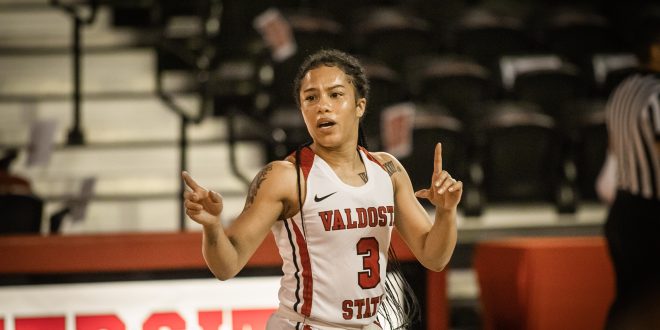 The VSU Lady Blazers basketball team has started the season at 8-1—their best start since 2007.

The Lady Blazers opened the season with a win against West Georgia on Dec. 12 and proceeded to win 6 games straight.

The 8-1 Lady Blazers were predicted to finish fourth in the GSC eastern division, behind Lee (first), Montevallo (second) and West Georgia (third). The girls beat all three teams consecutively to start the season, and currently sit alone atop the eastern division, with the 5-2 Lee Flames in second.

It has been the team’s defense that stands out to head coach Deandra Schirmer so far.

“We want to control the effort categories, like defense and rebounding,” Coach Schirmer said. “And this group has been very special defensively.”

Defense is also the focus for Kayla Bonilla, the senior guard for the Lady Blazers.

“We always want to get a stop first, then worry about scoring,” Bonilla said.

Bonilla has been key to the Lady Blazers impressive start to the season; leading the team in scoring, assists, and steals. She averages 16.9/3.4/2.9, respectively.

Bonilla was chosen to the Preseason All-GSC Eastern team and has thrived for VSU this season, building onto a strong career for the Lady Blazers.

The upperclassmen like Bonilla, senior guard Delany Bernard, redshirt junior Abby Rouse and graduate transfer Kwajelin Farrar have provided leadership that has been essential for VSU this season.

Coach Schirmer said the team’s chemistry is one of the team’s strengths thanks to the strong veteran presence on this year’s roster.

“I’m really impressed by how well we’ve come together as a group so quickly,” she said. “We have a lot of veteran leadership in this group, and they’ve been able to really take the reins and take ownership of the team.”

The overtime win against division rival Lee on Dec. 19 exemplified both the team’s chemistry and the excellence of veterans Bonilla and Farrar.

“It showed that we were the dogs, the better team in the end” Bonilla, who tied a career-high 30-point game, said.

Farrar added 20 points, 11 rebounds and four blocks to the impressive team win, including a put back in the final 10 seconds to seal the game in OT. The game was the third of the season, but it marked a landmark victory over a nationally-ranked opponent for the Lady Blazers.

The Lady Blazers, unlike the men’s team, haven’t had any games postponed this season. However, COVID-19 is always in the back of the player’s and coaches’ minds because of how careful they all must be in order to keep the season going.

“We know that we have to lock in, wear our mask when we go places and just be mindful,” Bonilla said. “We’re just grateful for even having a season.”

With more information coming out about COVID every day, and protocols being updated constantly, there is a lot more going on around this team than just basketball. However, Coach Schirmer puts the focus on what is within the team’s control: staying safe and playing basketball.

“For us, it’s been a matter of rolling with the punches,” Coach Schirmer said. “And whenever we’re supposed to play, just roll the balls out and be prepared to go.”

The Lady Blazer’s next matchup is a back-to-back set of games against Shorter on Friday, Jan. 22 and Saturday, Jan. 23.